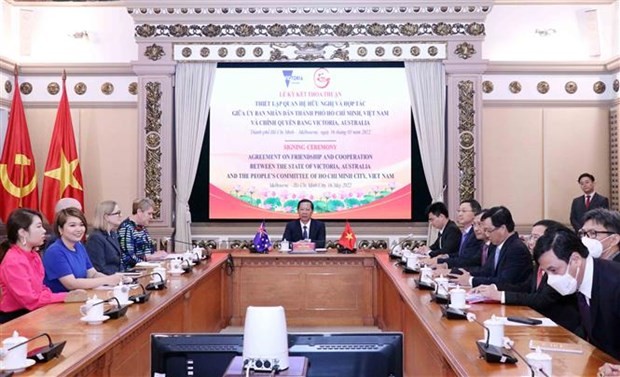 At the event in HCMC (Photo: VNA)
He made the pledge while joining virtual talks with Premier of Victoria Daniel Andrews and the signing ceremony of an agreement on friendship and cooperation between the city and Victoria.
Speaking at the event, the HCMC official expressed his delight at the thriving Vietnam-Australia relations, viewing them as the cornerstone of sound cooperation between the Vietnamese southern economic hub and Australian localities, including Victoria state.
He thanked Victoria’s authorities for supporting and working with HCMC to prepare for the signing ceremony, hoping that after the event, the two localities will join hands to carry out cooperation plans and programs contributing to Vietnam-Australia ties in the coming time. 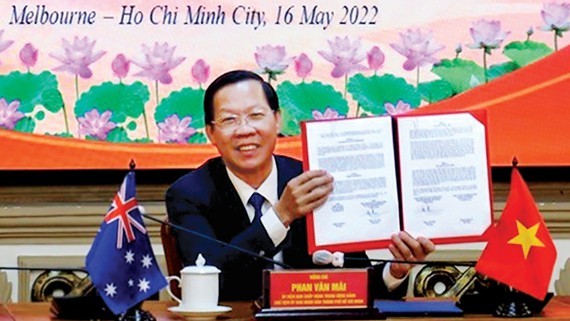 Chairman of the HCMC People’s Committee Phan Van Mai holds the signed agreement. (Photo: SGGP)
Mai affirmed that the southern city welcomes visits by authorities and businesses from the Australian state to explore cooperation chances in artificial intelligence, digital transformation, automation and pharmaceutical products, contributing to HCMC’s economic growth and smart city building.
For his part, Andrews highly regarded the signing ceremony as a milestone for the two localities to officially establish their friendship for stronger and more efficient cooperation in the future.
He hailed HCMC’s development potential and underlined Victoria state’s robust economic and technological development, affirming that the two localities hold various opportunities to promote cooperation, especially following the inauguration of a direct flight linking HCMC and Victoria’s capital Melbourne.