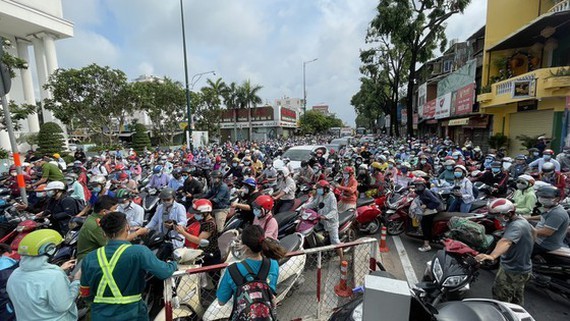 Thousands of vehicles get stuck in the Covid-19 checkpoint on Nguyen Kiem Street in Go Vap District on June 1. (Photo: SGGP)
The statement has been sent to the city’s competent departments, including Department of Police, HCMC High Command, Department of Transport, Department of Natural Resources and Environment, Food Safety Management Board, Power Corporation, Saigon Water Supply Corporation, Market Management Department, the People’s Commitees of Thu Duc City and districts across the city.

The authorities of Thu Duc City and districts are responsible for considering establishing Covid-19 control stations in the localities in accordance with the current situations.
On May 14, the HCMC Government asked the municipal departments of Police and Health along with relevant units and local authorities of districts and Thu Duc City to re-establish 69 Covid-19 monitoring and control stations at the city’s gateways, piers, bus and train stations, areas bordering neighboring cities and provinces throughout the city, including 12 city-level stations and 57 district-level checkpoints.
The stations were put into operation from 0.00 am on May 15 to control people and vehicles that enter and exit the city.

By Thanh An – Translated by Kim Khanh