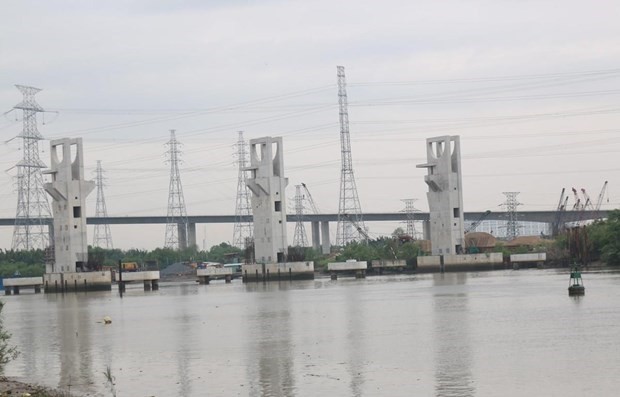 Muong Chuoi tidal control work is part of the 10 trillion VND tidal control project, scheduled to be completed in April 2018. (Photo: VNA)
The southern city will spend US$307 million on the Nhieu Loc - Thi Nghe wastewater treatment project - the most important element of the sanitation project.
According to architect and planning expert Ngo Viet Nam Son, the projects are a vivid illustration of the city’s efforts to address its longstanding flooding problem.
In addition to rapid population growth and climate change, a shortage of or poor construction of existing anti-flooding works are the main causes of the severe inundation seen often in the city, he said.
Local residents are confronted by flooding in low lying areas and also in central districts during the wet season. The problems are most pronounced between August and December, with high spring tides occurring twice a day for several days in a row. The main causes of the flooding are high tides, heavy rains, and substantial discharges of water from the Sai Gon and Dong Nai Rivers.
The floods have been intensified by sinking land and inadequate drainage systems amid rapid urbanisation, according to local experts.
Many important anti-flooding projects are taking a long time to finish due to difficulties in capital and site clearance work. Implementation of drainage rehabilitation projects accounted for only 46 percent of planning by 2020.
A VND10 trillion tidal control project was originally scheduled for completion by April 2018 but the actual date remains unknown as it has faced challenges in site clearance and capital.
The Department of Construction said the city has seen robust signs of tidal rehabilitation, with the number of inundated roads reduced to four as of the end of 2020 from 95 in 2008.
The city will also work to address drainage issues in central districts and adjacent areas.