Mayor of the 8th arrondissement of Paris Ms. Jeanne D’hauteserre spent a lot of time sharing with the delegation about the activities of 8th Arrondissement Council.

Speaking at the meeting, Mr. Phan Nguyen Nhu Khue expressed his pleasure at many good achievements on the foundation of the Vietnam - France strategic partnership in the past time. Besides that, he desired that the both sides would continue to have more and more opportunities to share experiences in the forthcoming time. 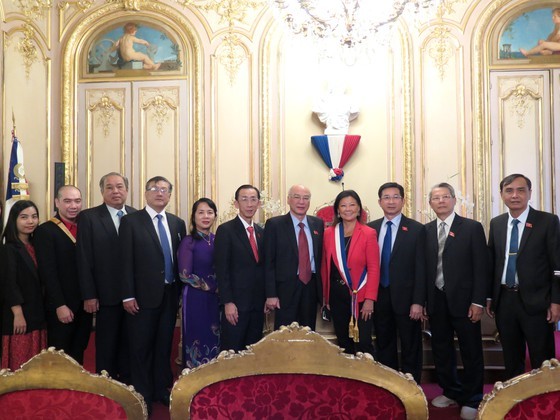 The delegation of National Assembly of Ho Chi Minh City poses for a photo with Mayor of the 8th arrondissement of Paris Ms. Jeanne D’hauteserre
On the same day, the delegation visited the Embassy of Vietnam in Paris.
Vietnamese Ambassador to France Nguyen Thiep informed the delegation about good relationship between the two states during past time. The French communities in HCMC highly appreciated the open, dynamic business environment in the city.

The  delegation of National Assembly of Ho Chi Minh City poses for a photo with Vietnamese Ambassador to France Nguyen Thiep
Mr. Phan Nguyen Nhu Khue praised great contributions of the embassy staff in promoting Vietnam-France strategic partnership to develop substantially and effectively all fields.
On the foundation of the good relations, Ho Chi Minh City is one of the leading localities in Vietnam in strengthening cooperation ties with the partner. The cooperation relationship between Ho Chi Minh City and other localities, partners of France continues to develop many specific cooperation contents such as friendly cooperation with Lyon and the region of Lyon including 59 cities via lighting projects as well as cooperation in improving air quality. The country often sent doctors to Ho Chi Minh City in order to share experiences in high quality medicine.

He believed that officials and employees of the embassy would continue to affirm their roles as a positive bridge to link between the Vietnamese communities in France with their homeland and the country, and call on the intellectual and material resources contributing to construction and development of the country, including Ho Chi Minh City.

Vietnamese Ambassador to France Nguyen Thiep shared that  the French communities in HCMC highly appreciated the open, dynamic business environment in the city.
Before ending the several- day working trip, the delegation of Ho Chi Minh City worked with the French Parliamentary in charge of social affairs.


Currently, France has total 250 projects with a capital of US$ 261 million in HCMC, ranking 15th among 106 countries and territories investing in the city.

Last year, the trade turnover between Ho Chi Minh City and France reached over US$ 855 million.