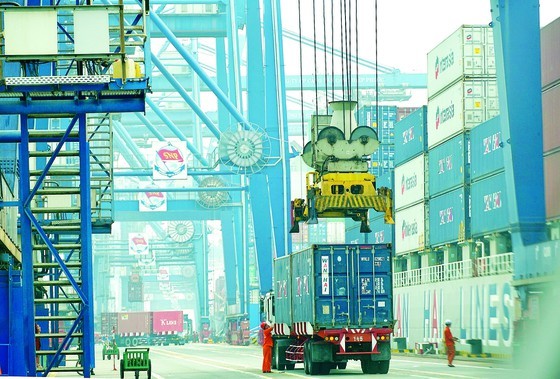 Tan Cang Hiep Phuoc Port in Nha Be District (Photo: SGGP)
Long Thanh International Airport in Dong Nai Province is regarded as the biggest transport infrastructure project of the country’s transport sector. It is expected to contribute three- five percent of the national gross domestic product (GDP), develop air routes and help the country’s economy develop.
According to the Airports Corporation of Vietnam (ACV), the section of 8,668 kilometers of the airport’s fencing walls will be completed in September while the making a survey serving for the planning of passenger terminals has reached 73 percent of the work volume.
The construction work of Long Thanh International Airport in the Southeastern province of Dong Nai was started in January. The airport is designed as a 4F class airport under the criteria of the International Civil Aviation Organization (ICAO).
The first phase of the project has been officially started at the kick-off meeting. The initiation stage is divided into four sub-ones, representing building tasks of a runway which is 4,000 meters long and 75 meters wide; airport operating area; controlled airspace, passenger and cargo terminals and other facilities with a capacity of 25 million passengers and 1.2 million tons of cargo a year.
The airport covering on an area of around 5,000 hectares is designed to serve 100 million passengers and 5 tons of cargo a year. It is one of the key national projects, aiming at developing the aviation industry and connecting Vietnam with the world. The construction of the airfield is expected to be finished late 2025. Total investment for the project is set to cost US$16 billion.
Seaport receiving giant vessels
Cai Mep International Terminal (CMIT) received the largest container vessel, the CMA CGM Marco Polo weighing in at 187,000 tons in January, 2019, marking the first Vietnam-Northern Europe direct service. Since then, CMIT has offered weekly services receiving super container ships.
The Cai Mep – Thi Vai seaport complex is a group of deep-water seaports with length of over 20km, accounted for over 30 percent of the country’s exports by containers. It is one of the 21 big seaports in the world which is capable of receiving the world’s biggest cruise liners weighing up 200,000 tons, bringing together world’s leading investor in seaport, said General Director of Portcoast Consultant Corporation Pham Anh Tuan.
In addition, HCMC’s seaport system including Cat Lai port complex on Dong Nai River with 7 terminals, Saigon port on Saigon River with 12 terminals, Hiep Phuoc port on Soai Rap River with 12 terminals, and Nha Be port on Nha Be River with 11 terminals, plays a key role in connecting the maritime transportation system of the South-eastern region and the Mekong Delta.
Among these ports, Cat Lai container terminal covering on an area of 160ha holds 38.5 percent of import and export container volume in the country became Vietnam’s largest container terminal and listed in the top 30 container ports with the largest volume in the world.
Solving traffic congestion problems 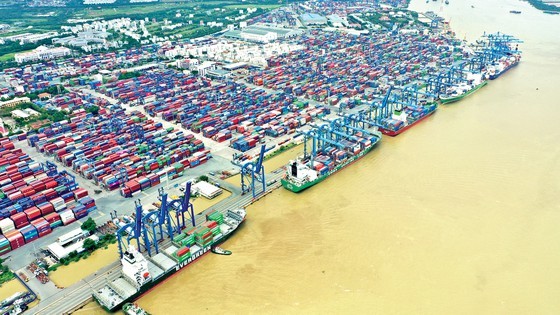 Cat Lai port complex
Although air and sea port facilities have seen a strong investment and development, their transport infrastructure system connecting them with processing zones, industrial parks and urban areas have not been fully completed.
Many transport infrastructure projects just have investment plans, such as the construction project of two roads linking with Long Thanh Airport which procedures having been completed by the ACV.
Ba Ria- Vung Tau Province is focusing on implementing main projects, including the road 991B, Phuoc An Bridge, Bien Hoa-Vung Tau Expressway, Long Son-Cai Mep and Phuoc Hoa-Cai Mep roads, a railway connecting Cai Mep-Thi Vai seaport complex to provinces and cities.
Meanwhile HCMC needs to invest in transport infrastructure connecting with marine terminal facilities, including the road leading to Cat Lai and Hiep Phuoc ports, Soai Rap fairway, the connection between railway and seaports, the development of logistics service that must go hand in hand with seaports, specialists said.
In addition, the Cai Mep – Thi Vai seaport complex will be developed into the international transshipment hub, receiving vessels more than 50,000 DWT and ensuring the goods transport in the southeastern economic region in Dong Nai River Basin while HCMC’s seaports will receive ships under 50,000 DWT to ensure the goods transport of the southwestern economic region in Dong Nai River Basin.
According to the construction master plan for the HCMC to 2030 with a vision to 2050 approved by the Prime Minister in 2017, the city will be developed into the country’s largest economic center; a regional and global financial center; a hub of culture, knowledge, creativity, scientific research, technological transfer, high-tech agriculture; and a center of tourism, finance and trade, services and logistics.
The Government has delegated the Ministry of Transport to urgently invest in the city’s Ring Belt No.3 and the Ring Belt No.4 in order to ensure uninterrupted transport of essential goods.