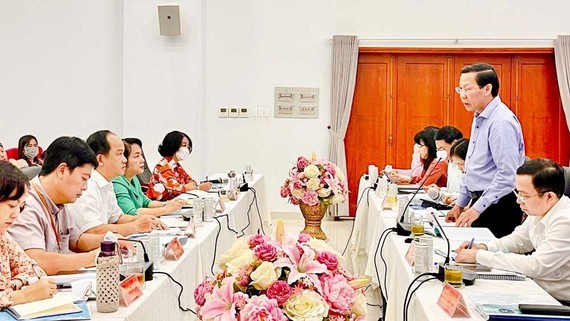 Chairman of the HCMC People’s Committee Phan Van Mai speaks at a wokring session on performance in administrative reform with the People’s Committee of District 1 on July 1. (Photo: SGGP)
At the working session, the city’s chairman highly appreciated District 1’s efforts in applying information technology in managing the population and offering public services online to save time and reduce administrative burdens for people and businesses, and implementing a trial of the model of administrative reform.

In the first six months, District 1 received and solved more than 334,000 document files and launched innovative models of administrative reform and online public services. The ratio of individuals who have used online public services at levels 1 and 4 showed positive changes.
The delegation also inspected the one-door mechanism in granting construction and business licenses in the district and acknowledged its effectiveness and simultaneous cooperation among departments.