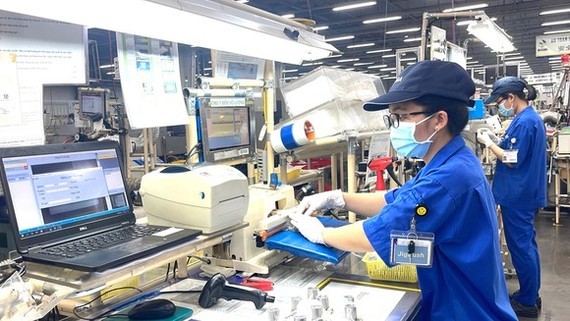 According to Mr. Nguyen Khac Hoang, Director of the HCMC Statistics Office, Vietnam's economy has maintained a strong recovery momentum despite the continuous increase in commodity and fuel prices and the disruption of the supply chain. Besides, domestic demand has recovered robustly, retail sales of consumer goods and services have grown steadily, tourism has been vibrant again, export activities have accelerated, and stably-grown credit has supported capital positively for the economy.

As a result, the gross regional domestic product (GRDP) in the first six months of 2022 was estimated at VND511.91 trillion, up 3.82 percent over the same period. Of which, the commercial service sector contributed the most, with a growth rate of 4.83 percent in the context that service activities have just begun to recover after being heavily affected by the Covid-19 pandemic; the industrial and construction sector grew by 2.23 percent; the agricultural sector contributed the lowest, with an increase of only 1.77 percent.

In the structure of the economy in the first six months of 2022, the commercial service sector accounted for the highest, with up to 64 percent, followed by the industrial and construction sector with 22 percent. Product taxes minus product subsidies accounted for 13.5 percent, and the agriculture, forestry, and fishery sector accounted for 0.5 percent. The added-value of nine key service industries accounted for 58.8 percent of the GRDP and 91.8 percent in the service sector, such as commerce with 16.9 percent, transportation and warehousing with 9.8 percent, finance and banking with 8.9 percent, professional activities, science, and technology with 5.6 percent.

The business and production situation of enterprises has recovered and flourished. The Index of Industrial Production (IIP) has maintained a positive growth from February 2022 to now. Generally, in the first six months of the year, it rose by 3.1 percent, with 20 out of 30 secondary industries posting positive growth.

Licensing to establish domestic enterprises surged by 13.4 percent, of which industrial enterprises recorded the highest rise of 19.1 percent; FDI attraction hit $2.21 billion, up 55.2 percent. These are positive signs showing that domestic and foreign enterprises have faith in the economic recovery and macroeconomic stability policies of the Government and the City.

However, according to the HCMC Statistics Office and specialized agencies, to successfully complete the socio-economic development goals, targets, and tasks in 2022, from now until the end of the year, the city needs to focus on solving quickly and effectively the following main contents:

The city should strictly and fully implement the regulations on Covid-19 prevention and control; support resources to facilitate recovery and development for businesses, such as speeding up the 2-percent interest rate support package worth VND40 trillion according to Circular No.03/2022/TT-NHNN and social housing projects and housing for workers; focus on handling bottlenecks and tie-knots on land.

It should resolve legal conflicts over procedures for land allocation, determination of compensation unit prices, payment and settlement procedures for capital construction to speed up disbursement of public investment capital; control prices in the area through price stabilization programs; promote administrative reform and improve the investment environment to attract large FDI investors, focusing on improving the Provincial Competitive Index (PCI) and the Public Administration Reform Index (PAR); strengthen the application of information technology, especially in places where public administrative services are performed - consider this an urgent task, thereby changing management thinking and administrative methods in the society; drastically complete the project to build HCMC into a smart city and the Digital Transformation Program, in which the digital economy is considered the future growth engine of the city.