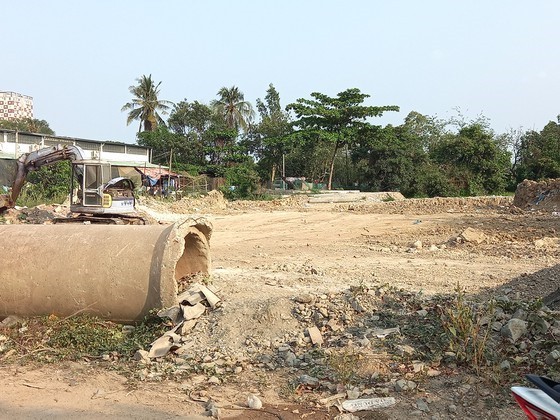 Construction site of Ring Road No. 2 abandoned. (Photo: SGGP)
One of the projects delayed aimed to connect Pham Van Dong Street, one of the artery roads in HCMC, to the Go Dua - National Highway 1 intersection has been delayed indefinitely, the site abandoned to the elements and concrete pieces broken up by scrap collectors.

Similarly, the Second Thu Thiem Bridge over the Saigon River was expected to be finished on April 30 of 2020 and has been completed by 70 percent, but constructions have also been halted due to administrative roadblocks.
Traffic related infrastructures are not the only victims. In the city center, the Phan Dinh Phung Sports Center project in District 3 has also been delayed for many years.
Among the BT projects ceased, phase 1 of the million-dollar anti-flooding project taking into account climate changes is one of the very few to be continued soon. The contractor at the end of December 2020 sent a report to the HCMC People’s Committee on financial damage caused by stopping constructions.
Accordingly, works began in mid-2016 expected to be completed after 36 months but is now two years behind schedule. 95 percent of the whole projects has been finished since January 2021 but got ceased, and the costs of labor, machinery and equipment, depreciation of materials, warehouse leasing, among others, have cost the investor over VND45.6 billion (almost US$2 million).
Meanwhile, a series of other BT projects are currently behind schedule or ceased completely, causing loss of materials and equipment and putting investors in serious debts.
According to Van Phu Bac Ai JSC, the investor of the project connecting Pham Van Dong Street to the Go Dua - National Highway 1 intersection, they have spent over VND900 billion (about US$39 million) for site clearance and more than VND400 billion (about US$17 million) for construction investment but have not received any disbursement from the city, and their bank debt has reached over US$8.7, said General Director Tran Duc Thang.