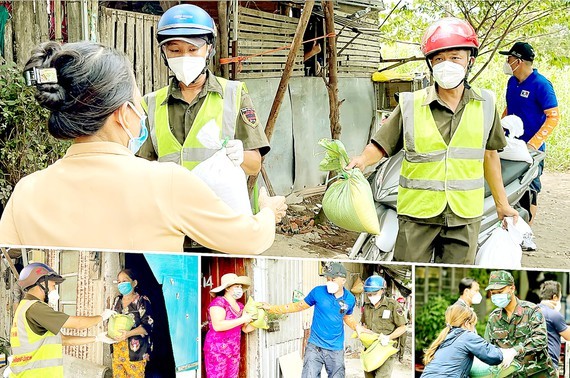 Social security maintenance tasks are put at the top priority to support vulnerable people in HCMC during the pandemic. (Photo: SGGP)

It is not hard at all these days to find on popular social networks such statuses as ‘I’m so worried, I’m so confused. I can’t understand what they’re doing to control this outbreak, seeing that more and more people die each day’, or ‘Please help people in Binh Tri Dong Ward of Binh Tan District. They’re dying of hunger and Covid-19’.

When asked if the information in these statuses is true or not, Nguyen Thi Hoa Thuan – owner of the Facebook account ‘Thuan Thien’, who shared those news pieces – admitted to her husband that she ‘heard people say so’, and that she found the news interesting and wanted to share to others. Her husband then explained to her the danger of spreading unverified news online or offline, and she withdrew such statuses. She also unfollowed the account ‘Anh Minh’, who usually posts that kind of information.

In a similar case is Thu Ha, who regularly shares information about pitiful people in statuses like ‘Anyone near Binh Hung Hoa Ward please help these people because they’re dying of hunger’, or ‘Oxygen tank in need, he’s dying, please contact 0704405…’, without proper verification. Due to the content, such news is quickly shared on popular social networks like Facebook, Zalo, TikTok.

To make it worse, some people purposely modify clips and images to take advantage of people’s benevolence like the case of Facebook account ‘Bac si Khoa’ in August 2021, which was then proved untruthful.

Regarding the vaccination campaign being carried out in HCMC these days, there was once a YouTube clip showing a man standing in a stadium waiting to be vaccinated among many people. He reacted violently when knowing the name of the vaccine to be injected and motivated others to follow him to refuse the vaccine. The clip’s owner said that it was recorded in Hiep Thanh Ward of District 12. The clip was furiously shared on social networks, along with negative comments without information verification.

Chairman of District 12 People’s Committee had to publicly announced that the news was completely untrue as District 12 at that time did not carry out any vaccination round at such a location.

More recently, on Facebook and Zalo, there are images about people crowding before the People’s Committee of many wards to ask for social security packages. The Facebook account ‘Thuong Nang Thuong’ shared a post of another account named ‘Huynh Thanh Dong’ on 1pm September 6 about residents of Binh Hung Hoa B Ward coming to the People’s Committee of the ward to request the VND1.5-million support package, with a promise to do the same to receive money after 1-2 days.

Such statuses like these encourage people in need to crowd together at one place, which is medically harmful. In addition, these kinds of content make citizens misunderstand helpful policies of the municipal authorities, thinking that only by banding together in front of a functional agency office can people receive support.

More seriously, Facebook account ‘Nguyen Dinh Dong’ posted a status on August 20 with the content that people in need of commodities should hang a white flag at their front door, leading to the illegal campaign ‘White flag at front door in Vietnam’ with the belief that it is the most effective way to attract the public’s attention and ask for help.

Other Facebook users commented their agreement and enthusiastically encouraged people to do the same, wearing white clothes and hanging white flag as a sign of ‘help needed’, so that people all over the country can follow the lead.

Obviously, these fake information statuses and illegal campaign refuse the hard work of the localities and the frontline forces trying their best day by day to distribute support packages systematically to people in their areas and to cure sick people, while wrecking havoc to all efforts to put the pandemic under control so that the city can come back to the new normal status.