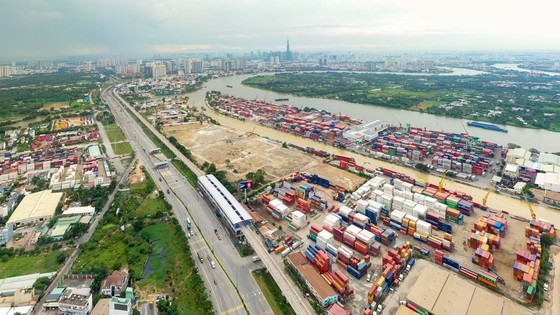 ICD Truong Tho port cluster includes five ICD such as ICD Tracomexco - Truong Tho, ICD Transimex, ICD Sotrans, ICD Southwest - Tanamexco, and ICD Phuc Long. This cluster of ports covers 49.2 ha; more than 1,100m of wharf and a warehouse of 6.6ha.
According to the orientation to 2030 approved by the Ministry of Transport, ICD Long Binh port must meet the capacity at Truong Tho port after relocation and meet the demand for goods through the port in the future.
Despite the complicated development of the Covid-19 epidemic, many trucks and container trucks were still queuing in long lines every day in and out of the Truong Tho port area to deliver and receive goods. According to the Department of Transport in Ho Chi Minh City, the volume of goods passing through Truong Tho ICD port in recent years is very high about 15 million tons yearly, many times higher than the planned capacity by 2020.
The large volume of goods leads to an increase in the means of transport in and out. Traffic congestion often occurs on the Hanoi Highway section in Thu Duc District, the only road leading to the port complex. Therefore, people in this area have always been worried because they have regularly witnessed accidents between motorbikes, container trucks, and trucks.
Bui Hoa An, Deputy Director of Ho Chi Minh City Department of Transport, added that due to the epidemic, fewer vehicles are seen in the port. However, traffic is still congested during rush hours. Currently, around 2,000-2,500 vehicles entering and leaving the port a single day exceeding the plan for many years.
According to the orientation of urban planning in the East of Ho Chi Minh City, Truong Tho ward will be the center of Thu Duc city; hence, it is not appropriate for such a large cargo port to exist. The People's Committee of Ho Chi Minh City has requested Thu Duc City to urgently promote investment procedures to build Truong Tho urban area. This area will become the center and highlight of Thu Duc City in the future.
According to the municipal Department of Planning and Economics, the Truong Tho area will be built into a new urban area located along the Hanoi Highway and metro line 1- the Ben Thanh - Suoi Tien line. Also according to the Department of Planning and Economics, the People's Committee of Ho Chi Minh City has just chosen the first prize for the contest "Highly interactive creative urban planning ideas in the East". The first-prize winning project proposes to build a highly interactive and innovative urban area in the East with a focus on 6 main subdivisions. One of them is the Truong Tho ICD area.
The People's Committee of Ho Chi Minh City has directed the People's Committee of Thu Duc City to urgently submit a 1/2000 scale zoning plan in the area related to the investment project to build a port cluster transshipment - New ICD in Long Binh ward to the competent authorities for approval. Once the 1/2000 scale zoning planning project is approved, the Department of Planning and Investment will carry out procedures to select investors to implement the new ICD construction investment project in Long Binh ward along with the construction project of Truong Tho urban area.
Being an expert, Prof. Pham Sanh said that Ho Chi Minh City authorities have made a good decision while Bui Van Quan, Chairman of Ho Chi Minh City Cargo Transport Association, said the investment in Long Binh port is extremely necessary. However, to facilitate freight transport, Ho Chi Minh City needs to focus on concurrently investing in a complete transport infrastructure system connecting Cat Lai seaport on Dong Nai river with the Long Binh port area.