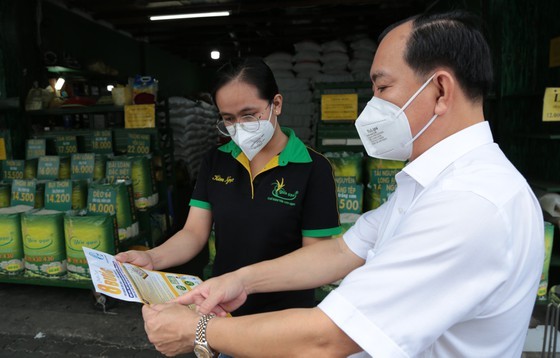 A representative of the People's Committee of District 7 checks and guides business establishments on the first day after social distancing was loosened. (Photo: SGGP)
The district selected more than 150 eligible facilities to pilot the resumption of operations from September 16 to 30. In Cu Chi and Can Gio districts, although the pandemic has been controlled, business establishments have not yet opened. The main roads are still less traveled.

On the morning of September 16, businesses and business households that have been licensed to pilot the resumption of operations in District 7 have all been put up signboards that read "Green Enterprises" and "Green Business Households". The district also applies information technology for management through the issuance of QR codes for electronic medical declarations and guidance on requirements to comply with when operating.

However, many establishments, shippers, and people use the HCM Health app for the first time, so they are still confused between the old and new apps. Some people were allowed to go to the market, but they had to return because they forgot to bring their smartphones to scan the QR code. There were also cases where the QR code was scanned but not recognized by the app.

Le Van Hai, the owner of Hien Lanh Eatery in Tan Phong Ward, said that it is relatively easy to register for resuming operations. Currently, travel remains difficult, and he cannot buy enough ingredients, so his eatery only serves four dishes for takeaways via the app in the morning. If sales go well, he will open all day.

A fast-food store in District 7 sells food by delivery service. (Photo: SGGP)
At Tan My bread shop in Tan Phu Ward, Luong Thanh Huy said that it had been a long time since his establishment was as busy as it was that day. He is very happy to be back in business and complies strictly with the requirements on pandemic prevention.

Despite having not yet been licensed to operate, the next-door Yen Gao store opened its doors early for some staff members who are staying there to clean and rearrange items. The store owner has registered for piloting resumption of operations, so all preparations must be ready so that when being granted a "Green business" signboard and a QR code, the store will operate immediately.

From early morning, Nguyen Thi Thanh Trang, the owner of an electrical appliance store in Huynh Tan Phat Street in Tan Thuan Dong Ward, reopened her store after three months of inactivity. On the first day, the best-selling items of her store were faucets and propellers.

“All my family members have already had two injections of the Covid-19 vaccine. Therefore, the store was approved to open again by the district," said Trang.

According to Standing Deputy Secretary of the District Party Committee of District 7 Tran Chi Dung, the district is receiving online applications of production and business establishments registering to resume operation through the district's official information pages. Besides coordinating with the Department of Information and Communications of Ho Chi Minh City to develop an application for business registration to serve people and businesses, District 7 has granted pilot licenses to 151 production and business establishments, with priority given to the following sectors: catering service for takeaways, supermarkets, convenience stores, drugstore, construct, and notarization service.

From the pilot results, the district will evaluate to remove difficulties and learn from experience to organize better to help people start business activities in the new normal soon.

District 7 is also assessing the safety conditions of the parks before reopening them. If eligible, at first, the district will resume operations of about 30 percent of parks. The condition for people to enter parks is to have at least one vaccine injection 14 days ago. At the same time, they must register with the management board of the apartments and comply with the distance regulations and the 5K principle. 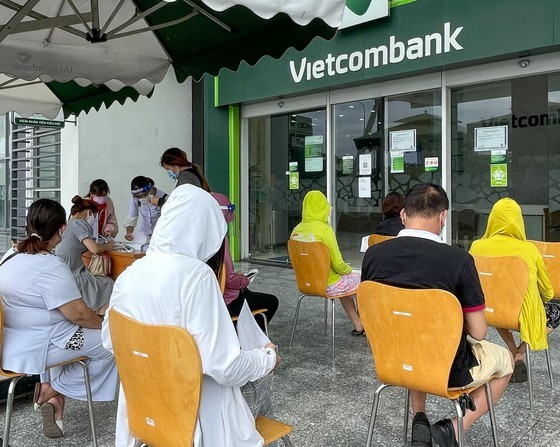 Customers are waiting for their turns to do transactions at Vietcombank Nam Sai Gon. (Photo: SGGP)
Cu Chi and Can Gio districts are waiting

On September 16, many traditional markets, stores, and business establishments in Can Gio and Cu Chi districts still have not reopened yet. According to Secretary of the Can Gio District Party Committee Le Minh Dung, the district is rushing to complete the draft economic recovery plan after September 15 and is developing sets of evaluation criteria for enterprises, traditional markets, supermarkets, convenience stores, accommodation services.

In Cu Chi District, the reopening of activities remains modest. There are still few people on the main roads. People passing through the checkpoints must have a travel permit or an invitation for vaccinations, and vehicles carrying goods must have a green-channel QR code to travel.

According to the Secretary of the District Party Committee of Cu Chi District Nguyen Quyet Thang, the district also plans to allow markets, supermarkets, and business establishments to reopen. It is expected that there will be four traditional and field markets to open on September 17. However, the district has not deployed yet because it is waiting for instructions from the city.

District 5 proposes to open a mobile market in green zones

On September 16, Mr. Phan Nguyen Nhu Khue, Member of Standing Committee, Head of Propaganda Department of HCMC Party Committee, attended and delivered a speech to direct the conference to implement Covid-19 prevention and control in District 5 after September 15. He acknowledged the efforts to gradually transform and control the pandemic of District 5 and asked the district to step up propaganda so that the people would agree and continue to comply with regulations on social distancing well and deploy the third welfare package timely, publically, and transparently.

On this occasion, District 5 praised and encouraged the units that did well in the Covid-19 prevention and taking care of the life of citizens. The district also asked the city to allow the opening of a mobile market in the green zones, which is expected in wards 3, 4, and 10.