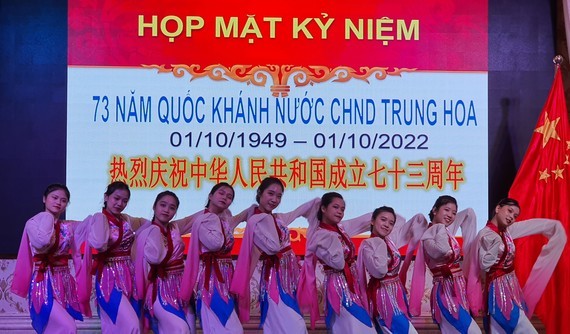 An art performance in the gathering marking the 73rd anniversary of China’s National Day (October 1) in HCMC
Speaking at the event, Chairman of the municipal VCFA Duong Quan Ha highly appreciated the long-lasting traditional friendship between the two countries. On the basis of the comprehensive strategic partnership over the past years, there have been many high-level visits between Vietnam and China aiming at stabilizing and developing relations between the two countries.
Many scientific conferences in various fields, especially the economy and country’s construction process adapting to the new normal state have been organized for the Parties, Governments and Peoples of the two nations to exchange experiences.
The HUFO and the VCFA together with the Embassy of China in Hanoi have closely cooperated to maintain and consolidate Vietnam-China relations over many years, Mr. Ha added.
According to Mr. Wei Huaxiang, Consul General of China in HCMC, China has achieved leapfrog economic and social development over the past 70 years to become the world's second-largest economy and keep its position as the world's largest manufacturing country. China's GDP reached more than US$100,000 billion with a per capita GDP exceeding US$10,000.
China remained the largest trade partner of Vietnam and the ASEAN bloc. Vietnam has become the sixth largest trading partner of China. The two-way trade revenue between the two countries reached US$230 billion.
He appreciated the role of HCMC which is a center of the economy, culture, science and technology of Vietnam, contributing to the Vietnam-China exchange activities; and recognized the local-level cooperation between the two nations.
He affirmed that the Consul General of China in HCMC will be ready to cooperate with the Party Committee and People’s Committee of HCMC; encourage Chinese provinces and cities to implement cooperation with the southern economic hub, participate in building a center of finance, cultur,  science and technology in the city, strengthen infrastructure connectivity and contribute to the Vietnam-China comprehensive strategic cooperative partnership.