Despite the sudden increase in the number of passengers, employees of the bus stations made their efforts to encourage people to line up, keep their distance, and fill mandatory medical declaration. 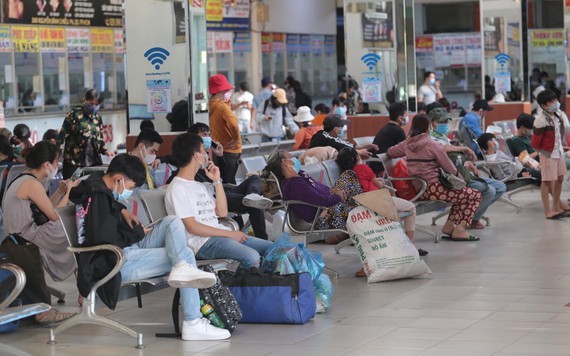 Passengers at a bus station yesterday
Bus drivers and assistants tried to arrange seats for passengers at a safe distance from each other. Not more than 10 passengers are allowed to sit on a bus. Restaurants and eateries at the bus stations were also temporarily closed.
On the same day, the Center for Public Transport Management under the city Department of Transport announced that from midnight on May 31, five subsidized bus routes in Go Vap District, Thanh Loc Ward, and District 12 will be suspended from operating. Bus routes code 07 of Cho Lon - Go Vap bus station and bus route code 148 of Mien Tay bus station - Go Vap District will stop in Pho Quang Street. Bus fleets passing through Go Vap District and Thanh Loc Ward are not allowed to stop and pick up and drop off passengers. In addition, all bus routes from Ho Chi Minh City to the southern provinces of Long An and Dong Nai. Particularly, the bus route code 61-1 to Binh Duong Province runs on the route Thu Duc - Di An.