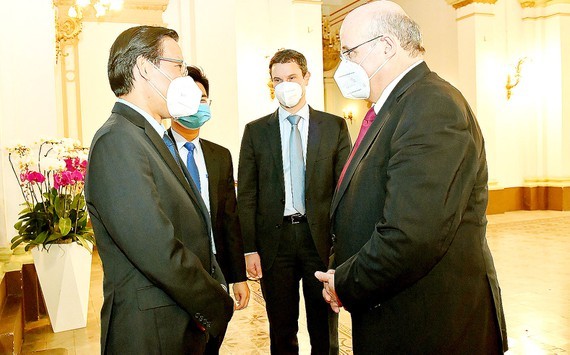 He highly appreciated economic cooperation between HCMC and Austria. The bilateral trade turnover between the two sides reached US$159.4 million in the first ten months of 2021, up 164 percent compared to the same period last year. Currently, Austria ranks 31st among countries and territories investing in HCMC with 16 projects worth a total investment of more than US$41 million.
Chairman of the HCMC People’s Committee, Phan Van Mai affirmed that the municipal government commits to create favorable conditions for foreign investors, including Austrian businesses to invest and participate in trading activities in the city’s priority sectors for investment, such as clean energy, telecommunications infrastructure, digital economy and high technology.
For his part, Austrian Ambassador of to Vietnam, Hans-Peter Glanzer said that after the establishment of the Austrian Commercial Office in HCMC, the city has become one of the important destinations for Austrian investors. Austria will strengthen export of high- tech products to Vietnam and continuously carry out projects in fields of smart city, transportation, underground transport works, environmental protection and drug in HCMC.