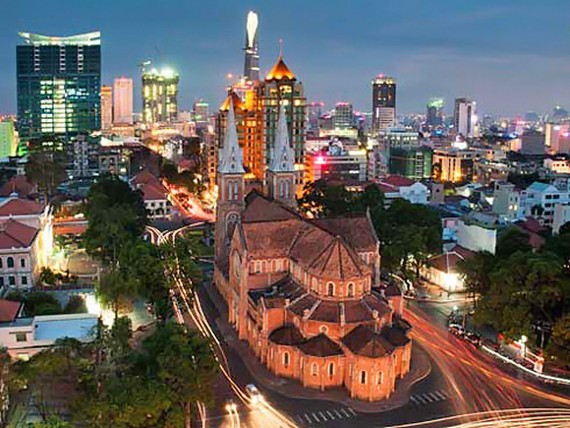 A corner of HCMC
Summarizing more than four years of implementing the National Assembly’s Resolution No. 54/2017 on piloting specific mechanisms and policies for the development of Ho Chi Minh City, the Government proposed the National Assembly to allow the southern metropolis to continue implementing the Resolution to the end of December 31, 2023. Moreover, the content should be included in the Resolution of the fourth session of the fifteenth National Assembly.
This is an important content in the Government's report, signed by Minister of Finance Ho Duc Phoc, authorized by the Prime Minister, and sent to the National Assembly for the preparation of the fourth session.
In the Resolution 54, the National Assembly allowed Ho Chi Minh City to pilot a number of mechanisms and policies in four areas including land management, investment management, financial management - state budget and authorization mechanism and income of officials, civil servants and public employees under the management of the city.
Regarding the policy of additional income for state staff, the municipal People's Council has issued a resolution on regulations on spending additional income for civil servants and public employees. Accordingly, as per the 2018 regulations, the coefficient of adjustment to increase income to implement the specific mechanism at each unit was 0.6 times maximum and it was 1.2 times and 1.8 times in 2019 and in 2020 respectively.
However, in 2019, 2020, and 2021, based on the ability to balance the budget and before the situation of the Covid-19 epidemic, Ho Chi Minh City has adjusted to increase or decrease the additional income expenditure coefficient.
The total expenditure on actual additional income in HCMC in 2018 was more than VND2,800 billion while it was nearly VND7,640 billion, nearly VND4,270 billion and VND6,800 billion in 2019, in 2020 and in 2021 respectively.
The People's Council of Ho Chi Minh City has issued a Resolution on the income level of experts and scientists for the fields the city needs to attract talents in the 2018-2022 period. But so far, the People's Committee of Ho Chi Minh City has only approved the results of attracting five experts, scientists, and five talents.
Despite the low effectiveness of this policy, HCMC recommended that it be maintained in the future, because the policy of attracting experts, scientists and people with special talents is of great significance as it can fight brain drain and take advantage of talents’ knowledge and experience.
Besides existing achievements, the Government evaluated the implementation of the Resolution 54 and its limitations.