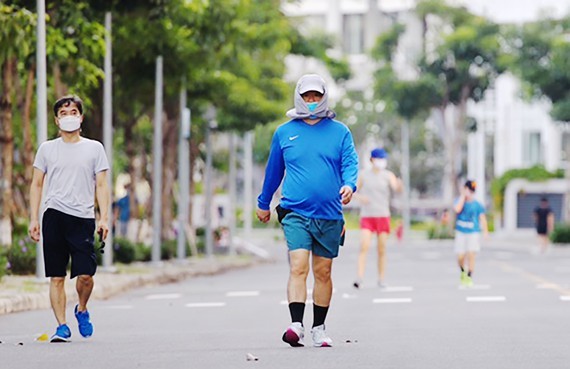 People should take physical exercises to prevent NCDs
The epidemic of NCDs poses devastating health consequences for individuals, families and communities, and threatens to overwhelm health systems. Noncommunicable diseases (NCDs), including heart disease, stroke, cancer, diabetes, and chronic lung disease, are collectively responsible for almost 70 percent of all deaths in the country annually, said Deputy Health Minister Tran Van Thuan. He added those who died of Covid-19 all have underlying health conditions including high blood pressure, heart diseases, diabetes, and other chronic diseases.
Worse, according to Dr. Thuan, the Southeast Asian country is bearing the burden of mental health. It is estimated each year, more than 14 million people, or equivalent to 15 percent of the country’s population, suffer from mental disorders.
Ho Chi Minh City-based University Medical Center has just treated a 63-year-old man in the city who was hospitalized due to sudden chest pain and breathing problems. The elderly man has a history of cardiovascular disease such as heart failure, converted atrial fibrillation, coronary artery stenosis, hypertension, type 2 diabetes, and previous cerebral infarction.
The examination results showed that the man had 70 percent coronary artery stenosis, and fibrous tissue and calcium dissected into the endothelium at an angle of 900. Doctors soon performed a stent placement and gave him some medication. After nearly a week of follow-up, he was discharged from the hospital with stable health.
Doctors said the rise of NCDs has been driven by primarily four major risk factors: tobacco use, physical inactivity, the harmful use of alcohol, and unhealthy diets.
According to the assessment of the World Health Organization (WHO) and many other international organizations, Vietnam's health care indicators such as life expectancy, infant mortality rate, disease control, medical examination, and treatment are better than that of other countries at the same level of economic development.
However, Vietnam is facing an increasingly serious increase in disease burden and mortality from non-communicable diseases. Today, non-communicable diseases are responsible for 7 out of 10 of deaths in Vietnam.
Acknowledging this situation, Dr. Thuan said that the burden of non-communicable diseases accounts for 70 percent of the total disease burden nationwide, and these diseases are the leading cause of death.
At a meeting on implementing health care cooperation activities recently held by the Department of Preventive Medicine under the Ministry of Health, Dr. Thuan said that the smoking rate among men is still high, accounting for 45 percent.
Moreover, 77 percent of Vietnamese men drink alcohol and nearly half drink excessively. He revealed more than half of adults eat less vegetables and fruits and people eat twice as much salt as recommended by the World Health Organization.
Furthermore, about one-third of the population today lacks physical activity, and the rate of overweight and obesity increases by an average of one percent per year.
Non-communicable diseases are the culprit of hospital overcrowding, hindering socio-economic development. Last but not least, non-communicable diseases require lifelong treatment resulting in increased medical costs and reduction of labor productivity and severely affects public health," said Deputy Minister of Health Tran Van Thuan.
To prevent non-communicable diseases, health experts said that authorities necessarily focus on a group of solutions such as promoting inter-sectoral coordination in formulating and implementing policies to control disease risk factors, encouraging people to increase physical activity and have healthy food especially reducing salt and consumption of soft drinks.
At the same time, local administrators should increase communication to raise people’s awareness of NCDs and know how to detect early signs of disease for timely examination and treatment. In addition, administrations should improve grass-roots health care institutions to early detect diseases.