In a talk with a reporter of Sai Gon Giai Phong, Mr. Quang said the first phase of human trials for Nano Covax, which began last December, has recently ended with three vaccine doses of 25 micrograms, 50 micrograms and 75 micrograms in two shots administered on 60 volunteers.

The Ho Chi Minh City-based Nanogen Pharmaceutical Biotechnology Company, manufacturer of Nanocovax, has been working with research teams including Pasteur Institute and the National Institute of Hygiene and Epidemiology to assess the vaccine’s effect on new coronavirus variants. Presently, the trial test result shows that the vaccine is highly effective on the variant originating from South Africa. Of course it needs more time for final conclusion.
Volunteers have enjoyed stable health following the shots. The national ethic council for biological research has assessed the trial results for the first phase of vaccine Nanocovax affirming that Nanocovax shots are safe, generate high immune response and have an effect on coronavirus variants; therefore, the council has allowed the vaccine manufacturer to carry out the second trial phase, said Mr. Quang.
With regard to the second trial phase, the Ministry of Health proposed Pasteur Institute should join hands with the Vietnam Military Medical University under the Ministry of National Defense to carry out the trial in the Mekong Delta Province of Long An’s Ben Luc District, he stressed. For the second phase, 560 volunteers aged from 18 to 65 will receive the vaccine with doses of 50 micrograms and 75 micrograms.
As scheduled, the first shots of the second trial phase will be administered on volunteers of the Vietnam Military Medical University and residents in Long An Province on February 26. In the end of March, the second shots of vaccine will be injected on volunteers, according to Mr. Quang. After the results of the second trial phase is reported, the administration of vaccine will move to the third phase scheduled in early May. 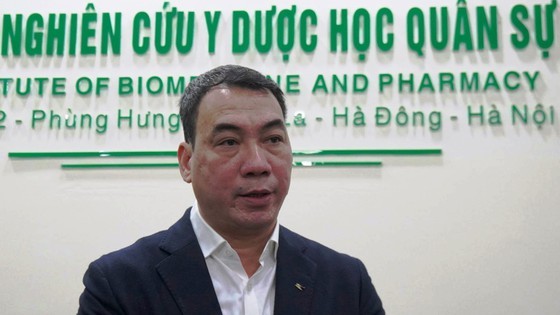 Nguyen Ngo Quang, Deputy Head of the Administration of Science Technology and Training (Photo: SGGP)
Normally, it takes 24 months to assess a vaccine effect; however, because the coronavirus pandemic has been plaguing the world, the vaccine will be injected on many people after it is proved to be safe and generate high immune; further research on the vaccine will be carried out, Mr. Quang revealed. In the third phase, vaccine NanoCovax may be injected on those at high risk of contracting Covid-19 including airport employees, flight attendants and people directly participating in the Covid-19 fight.

Mr. Quang said during the complex development of Covid-19 in the country, the earlier the country has foreign-made vaccine, the better the fight against Covid-19 is. Nevertheless, to have stable vaccine supply and ensure medical security as well as all people to access to vaccine, research and production of locally - made vaccine are top priority. Furthermore, Vietnamese Prime Minister directed to both buy foreign vaccine circulated in the world and invest in locally-made vaccine.