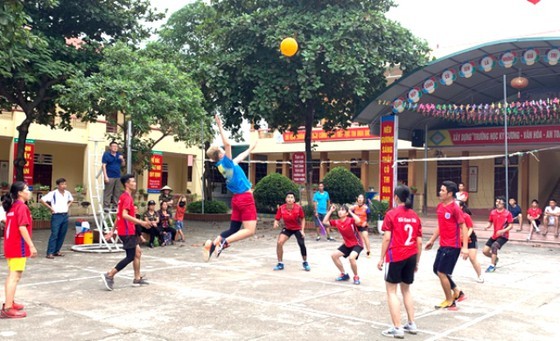 Deputy Health Minister Do Xuan Tuyen said that this nutritional census has the largest scale ever with the participation of 22,400 households in 25 provinces and cities. The survey's results have shown that the average height of Vietnamese people has changed drastically in the 18-year-old youth group.
Specifically, in the past ten years, the average height of Vietnamese males went up roughly 3.7 cm, while the average height of females increased about 156.2 cm.
Moreover, the diet and energy of Vietnamese people have also changed significantly. A Vietnamese person had an estimated allotment of 2,023kcal a day, a slight increase compared to that in 2010 with 1,925kcal per person daily.
Vietnamese people's consumption of vegetables and fruits approximated 66.4 percent - 77.4 percent compared to the Food Guide Pyramid’s recommendation for adults while the World Health Organization recommends 400 g/d of fruits and vegetables. Apart from that, meat consumption increased rapidly with higher consumption in the city, at 155.3g a person daily in 2020.
Some 19.6 percent of children under 5 years old nationwide suffered from stunting, which is ranked at the average level according to the World Health Organization's classification. However, there are still disparities between regions in terms of stunting rates and this rate remains higher in rural and mountainous areas.
Noticeably, the rate of overweight and obesity increased from 8.5 percent in 2010 to 19 percent in 2020, mainly in urban areas.