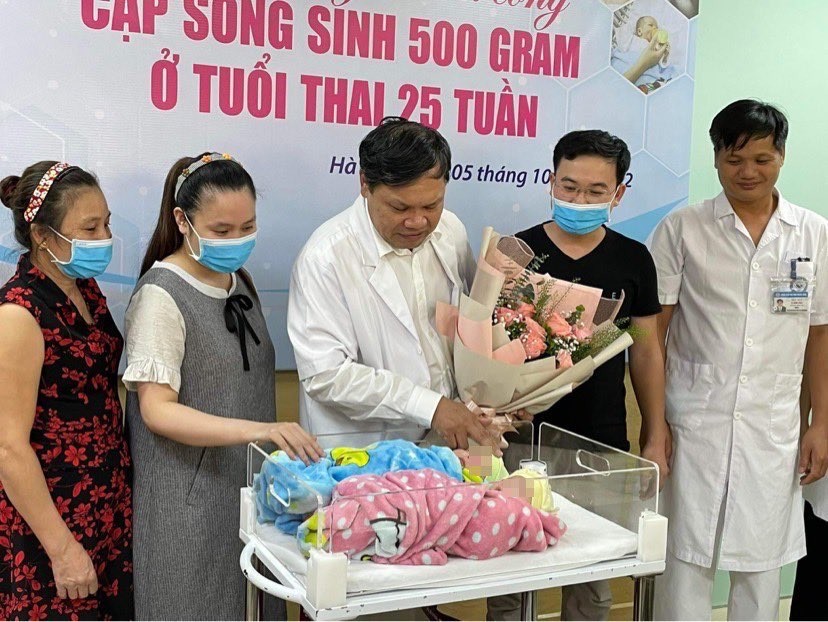 The twins can be discharged from the hospital
According to the infirmary, a 26-year-old pregnant woman in Hanoi’s Ung Hoa District who was infected with Covid-19 was pregnant at 25 weeks. The mother-to-be gave birth to one boy and one girl with a weight of 500g on May 16. At that time, her family did not have much hope for their children's lives.
However, doctors of the Center for Neonatal Care and Treatment in the National Hospital of Obstetrics and Gynecology did not give up but tried to save the two premature babies.
Dr. Le Minh Trac, director of the Center for Newborn Care and Treatment in the National Hospital of Obstetrics and Gynecology, said that extremely preterm babies are babies who were born before 28 weeks of pregnancy and have a weight of less than 1,000 grams. Critical organs – such as heart, lungs, digestive organs, and even brain – may not be developed enough to keep the baby alive without intensive medical care because they are at risk of asphyxia, respiratory failure, hypothermia, cerebral hemorrhage, intestinal necrosis, neonatal infections, metabolic disorders.
Therefore, doctors had to monitor them very closely and carefully; they received respiratory support, a surfactant pump, combined with mechanical ventilation for 43 days, oxygen for 30 days in addition to intravenous nutrition combined with digestion to prevent necrotizing enterocolitis.
Dr. Tran Danh Cuong - Director of the Central Obstetrics and Gynecology Hospital - said that up to now, three weeks after birth, the two babies know how to smile spontaneously while their mother was instructed Kangaroo mother care - a method of care of preterm infants.
According to him, the health conditions of the twins are stable.