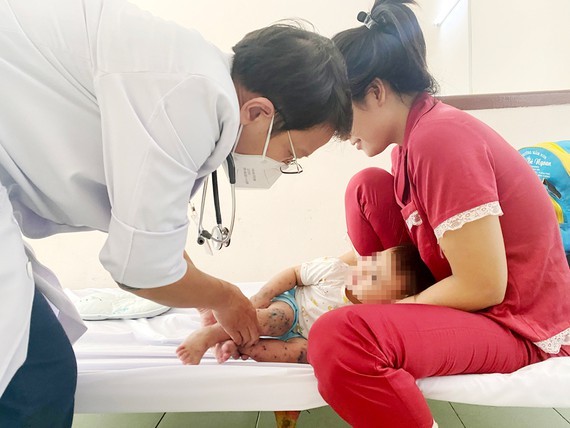 A doctor is examining a kid with HFMD
Recently, the number of cases is increasing, mainly in the southern city and provinces such as Ho Chi Minh City, Dong Nai, Binh Duong and Soc Trang, said the Ministry.
At the Hanoi-based National Children's Hospital, more than a month ago, the number of children with hand, foot, and mouth disease coming to the hospital for examination and admission increased very high, including hospitalizations with dangerous complications. For instance, a 31-month-old infant taken to the Center for Tropical Diseases in the National Children's Hospital on the fifth day of the illness was in a state of high fever, and burning pain in the mouth.
After examining him, doctors noticed that the skin of the baby's thighs was scattered with dry blisters, and diagnosed him with HFMD. Another case is that 15-month-old Hoang Nam was admitted to the hospital due to a high fever which does not go down, plus, he had fussiness and a sore mouth. Nam's mother shared she just thought that her baby had a fever and a sore throat, but she didn't expect the boy had HFMD because his hands and feet didn’t have blisters at home.
According to Deputy Director of the Center for Tropical Diseases Dr. Do Thien Hai, there has been an increase in the number of children with HFMD in the hospital. In April and May 2022, the hospital recorded 776 pediatric patients with HFMD, a surge of 759 cases compared to the previous two months. Worse, amongst 776 children, 114 of them had to be hospitalized for treatment.
Although HFMD occurs all year round, especially the seasonal transition is the most favorable time for the virus to develop. Hand, Foot, and mouth disease is a highly contagious illness that mostly affects infants and children. Most children with the disease have mild symptoms, but if not detected and treated in time, the disease can have dangerous complications such as shock, encephalitis, viral meningitis, myocarditis, acute pulmonary edema, and even lead to death”, emphasized Dr. Hai.
Meanwhile in Ho Chi Minh City, according to the city Center for Disease Control (HCDC), in the past week, the city recorded 1,070 cases of HFMD, an increase of more than 81 percent compared to the average of four weeks ago. The number of cases increased in most districts especially in Binh Hung Commune in Binh Chanh District, An Lac Ward in Binh Tan District, Nha Be town in Nha Be District, Ward 11 in Tan Binh District had a higher number of cases than the average of the last month.
Doctor Truong Huu Khanh from Ho Chi Minh City-based Children's Hospital 1, said that currently, the number of children hospitalized due to HFMD at the Department of Infection - Neurology has been increasing whereas there had been no cases more than prior two months.
The Children's Hospital 2 recorded 879 outpatients last week, many times higher than at the same time last month. The City Children's Hospital said that on average, the hospital received 80-120 children for HFMD examination every day, double that of the beginning of the month. Most of the children who come to the clinic have mild illnesses and can be monitored at home, only about 10-15 severe cases need to be hospitalized.
Facing the increasing situation of HFMD, Associate Professor Phan Trong Lan, Head of the Preventive Medicine Department under the Ministry of Health, said that in its document to people’s committees in cities and provinces, the Ministry has requested all agencies and socio-political organizations shall coordinate with the health sector to drastically and synchronously deploy solutions to prevent and stop the outbreak of HFMD in the area, focusing on areas with many cases of HFMD. At the same time, mobile anti-epidemic teams and mobile emergency teams should proactively work.
Doctor Du Tuan Quy, Head of the Department of Infection – Neurology in Children's Hospital 1, said that hand, foot, and mouth disease is common in children under 5 years old, but anyone can get it especially 3 years old ones. About 90 percent-95 percent of children with HFMD will receive outpatient treatment. The disease is usually mild and will resolve on its own in 7-10 days.
Doctor Do Thien Hai said that currently, there is no pharmacological intervention or vaccine available for HFMD. Each time a child is infected only creates antibodies to a certain virus; therefore, a relapse could be explained by infection by a different strain that could have resulted from genetic recombination.
To prevent children from developing severe illness, parents need to pay attention to early warning signs of severe disease such as fever above 38.5°C for more than 48 hours and unresponsiveness to antipyretic drugs, children startle even while playing. He advised parents to immediately take the child to a medical facility for timely examination and treatment if their children have one of the above symptoms.