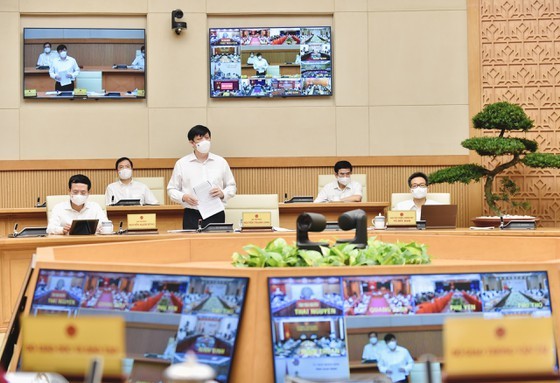 Minister of Health Nguyen Thanh Long speaks at the online national conference on May 29. (Photo: SGGP)
Assessing the mutation as very dangerous, Long said Vietnam will soon announce it on the world genome map.
According to the ministry, a multi-strain virus has been recorded in the 4th wave of COVID-19 outbreaks that has hit Vietnam since April 27. The India and the UK variants are the two most common ones, with the former dominating and the latter only found in Da Nang and some other localities.
The detection of the new variant pushed the total number of variants in Vietnam to eight.
The health minister emphasised that recent outbreaks have seen the virus spreading quickly and strongly in the air with high contagious level in narrow, unventilated spaces.
Symptoms of the disease have worsen, so intensive treatment in localities must be leveled up, he noted.
Vietnam reported 56 new COVID-19 cases in the past 6 hours to 12:00 on May 29, according to the Ministry of Health. Of the new cases, seven are imported and 49 are locally transmitted, including 46 in Bac Giang, one in Tay Ninh, one in Dien Bien, and one in the National Hospital for Tropical Diseases No. 2 in Hanoi’s Dong Anh district.
With the new cases, the country documented a total of 5,213 domestic infections, including 3,643 confirmed since April 27.