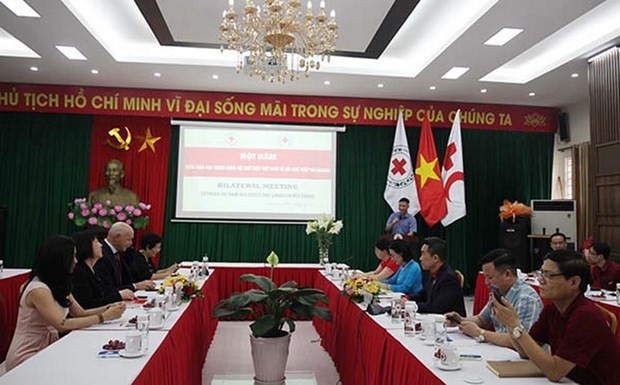 At the talks between the two red cross societies (Photo: redcross.org.vn)

Vice President and Secretary General of the VRCS Nguyen Hai Anh told visiting President and CEO of the Canadian Red Cross (CRC) Conrad Sauvé during their talks in Hanoi on May 21 that he is delighted at the fruitful cooperation between the two countries and the associations.
Anh spoke highly of the Canadian government and the CRC for their support to Vietnam, both material and spiritual, and in international activities.
The VRCS will further back the CRC to engage in the executive councils of the International Red Cross and the Red Crescent Movement, and support its Canadian counterpart in movements.
Sauvé said both Vietnam and Canada face such challenges as climate change and natural disasters, and possible risks relating to the Covid-19 and socio-economic impacts of armed conflicts.
The CRC has strength in the spheres like public health care, humanitarian aid, personnel training, technological application, and emergency aid, he said, affirming that Canada stands ready to help Vietnam in these areas.
Briefing the guest on the VRCS’s operations, Anh said his association is actively participating in the Government’s major programmes, including those on poverty reduction, new-style rural area building, and socio-economic development in ethnic minority-inhabited regions.
The VRCS is willing to cooperate with Canada to implement programmes on public health care given impacts of extreme heat, he stressed.
The two sides also concurred to cooperate in supporting their governments to address climate change impacts, improving the capacity for their workers, digital transformation, volunteer management and development, public health care and emergency aid.