Speaking at the visit, hospital director Dr. Truong Quang Dinh said that the hospital cooperated with Hung Vuong Maternity Hospital, where carried out surgery to deliver the conjoined twins last year, to perform the separation surgery which succeeded beyond medical workers’ expectation.
Nearly 100 doctors and nurses from leading infirmaries in the city including the City Hospital, Cho Ray Hospital, the Children Hosptial 1 and 2, Xuyen A Hospital took part in the surgery to separate the conjoined twins.

The two toddlers are in stable condition; they are being treated in intensive care unit for further treatment, said Dr. Dinh. It was a complicated surgery because only ten similar operations were performed successfully as per the world medical record.
Congratulating the hospital and surgery team’s success, Vice President Thinh said that she was concerned the case keeping following at the beginning. She was moved at the news that they were separated successfully. Ms. Thinh was so happy to see that both are in good condition.
She expected that medical workers will keep an eye on the twins who need medical care in the next time.

Ms. Thinh visits one of the toddlers (Photo: SGGP) 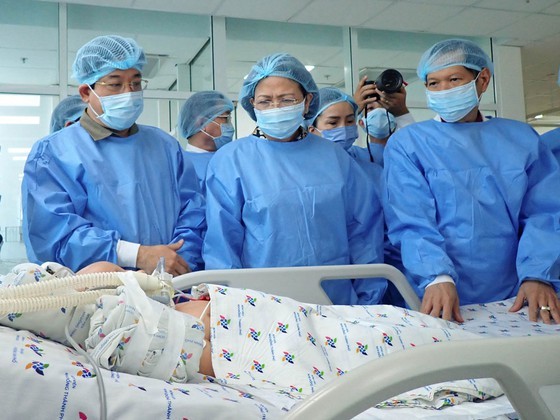 Ms. Thinh visits one of the toddlers (Photo: SGGP)
She also encouraged and congratulated the twins’ parents, Hoang Anh and Ngoc Thuy.
On the occasion, she gave VND50 million (US$ 2,166) to surgery medical teams and the National Fund for Vietnamese Children also presented VND20 million and medical equipment to the hospital and the twins. The Ministry of Health also sent certificate of merit to the hospital.