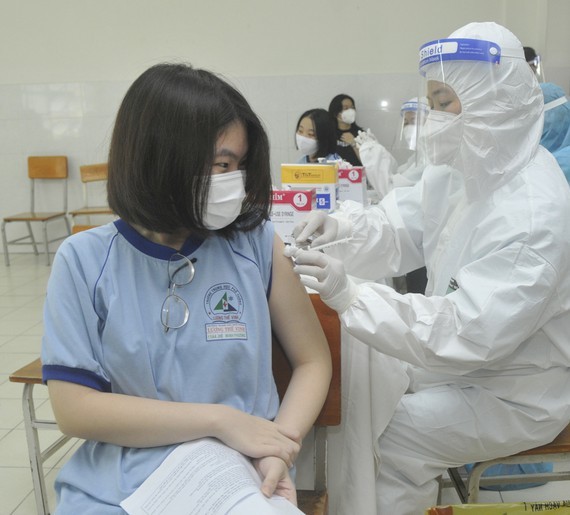 Illustrative photo
A ninth-grade female student in Hanoi’s Thuong Tin District died on November 28 after being vaccinated with Pfizer's Covid-19 vaccine meanwhile one of the four students in Bac Giang Province’s Son Dong District who experienced  anaphylaxis after getting vaccinated was also dead.
Chairman of Nhi Khe Commune Nguyen Viet Binh said that earlier, on the morning of November 27, this ninth-grader was vaccinated against Covid-19 according to the schedule of the school and the local health. Before the injection, this female student was carefully screened by doctors and she was diagnosed without health problems. After the injection was completed, the female student was monitored and her health was normal, so she returned to her family.
However, on the morning of November 28, this female student had health problems, so her family took her to Thuong Tin General Hospital for emergency treatment. She was then transferred to  Bach Mai Hospital - a hospital of higher level. Despite medical workers’ efforts to save her, the female student died at noon on the same day.
Leaders of Nhi Khe commune also said that at present, the health authority has been working to clarify the cause of this death while the local administrations offered condolences to the bereaved family of this student.
In news related to the Covid-19 vaccine for children aged 12-17, health care workers of the Bac Giang Department of Health have recently launched a Covid-19 vaccine injection for 700 students at Son Dong boarding high school and Son Dong High School No. 2 in Son Dong District.
After getting the Covid-19 vaccine jabs, four students at the two schools had anaphylaxis, and two of the eleventh graders showed symptoms of dizziness, shortness of breath, chest pain, nausea. Immediately after receiving first aid, these two students were moved to Bach Mai Hospital for emergency treatment.
However, on November 28, one of the two children died while the other is still using ECMO (artificial cardiopulmonary bypass) at Bach Mai Hospital. The remaining two cases have recovered and been discharged from the hospital.