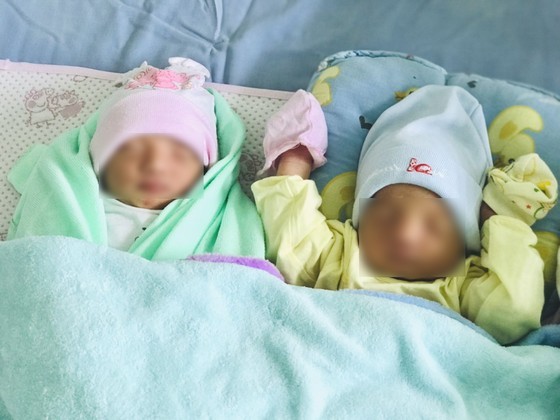 The two babies after the operation
Previously, the Department of Obstetrics and Gynecology received 31 year old pregnant woman in Quang Nam Province’s Tam Thanh Commune, who was 34 weeks pregnant with twins, showing signs of threatened preterm labor.
After diagnosis, doctors decided to carry out an operation to deliver babies.
Surprisingly, surgeons detected the first baby was born normally but the second baby was still in his own amniotic sac.
Doctors made an incision in the amniotic sac, taking the baby out to prevent the baby from being lack of oxygen after removing the amniotic sac from the mother's womb. Surgeons were successful in the operation; the two boys have the weight of 2.3kg and 2.4kg respectively.
Twins with one still in the amniotic sac is a condition that rarely occurs with the ratio of 1/80,000 babies of all pregnancies because normally, the amniotic sac will burst under the influence of uterine contractions during labor of the mother, or the professional manipulations of the doctor during surgery.