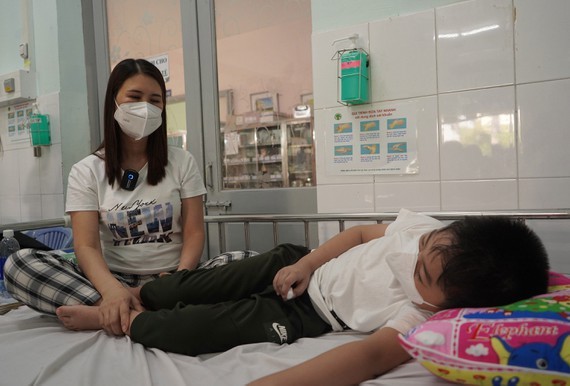 a dengue patient is treated in Children's Hospital
On April 28, the Pasteur Institute of Ho Chi Minh City said that the number of dengue fever (DHF) cases in the Southern region as of the sixteenth week of the year decreased by 23 percent per 100,000 population compared to the same period in 2021. Nevertheless, the number of severe cases and deaths increased sharply compared to the same period in 2021.
Some provinces and cities on the list of rapidly increasing rates of severe dengue include Ho Chi Minh City, Dong Nai, Binh Duong in the Southeast region and Soc Trang, Ca Mau, Vinh Long, Tien Giang in the Mekong Delta.
According to estimates, in the coming months, the dengue epidemic is likely to increase in Ho Chi Minh City; therefore, the Pasteur Institute recommends launching a campaign to kill larvae simultaneously and weekly, proactively spraying and stamping out epidemics when sufficient conditions are met. Health officials should regularly pay check-ups and monitoring. If dengue fever patients are diagnosed early and treated promptly, they will most likely recover with a few deaths.
In the context of the Covid-19 epidemic, deaths from dengue are likely to increase because patients are often afraid to go to local hospitals, leading to delays in treatment. Therefore, parents should take their childen to see doctors when they have signs of dengue disease such as a high fever continuously for 2-7 days with signs of hemorrhage such as petechiae, bleeding teeth, nose bleeding.
On April 28, the Ministry of Health sent an official dispatch to chairpersons of provincial and municipal people's committees on strengthening the prevention of the dengue epidemic. Because the number of dengue cases tended to increase due to the onset of the epidemic season, the Ministry of Health proposed chairpersons of people's committees in provinces and cities to direct the development and promulgation of plans for organizing activities to respond to the ASEAN Dengue Day (on June 15) and implementation of practical activities to communicate dengue fever prevention before the epidemic season.
Authorities in districts were assigned to assume specific responsibilities including directing and mobilizing political and social departments and organizations to coordinate with the health sector in implementing the campaign to kill larvae.
In addition, health officials must pay visits to all households in epidemic-affected and at-risk areas to check whether all water storage containers and mosquito breeding places are upside down.
The ministry also required the health sector to closely monitor the local treatment of dengue outbreaks, organize chemical spraying in all of the households in the outbreak area. According to the Ministry of Health, from the beginning of the year until now, the country has recorded 14,704 cases of dengue fever, including six deaths. Of these, three were recorded in Binh Duong province, one in Dong Thap, one in Tay Ninh and another in Dong Nai. Compared to the same period in 2021, the number of cases decreased slightly but the number of deaths increased by one case.