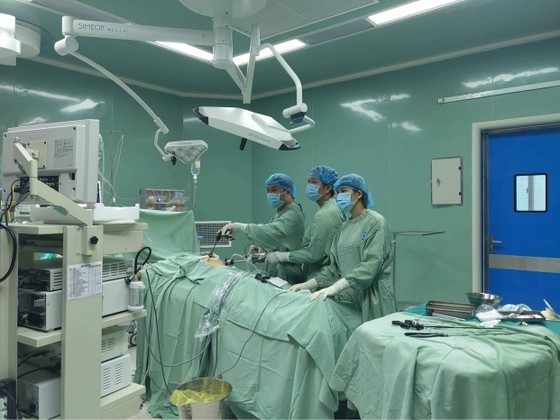 Medical workers perform successful surgery for 8-year-old girl without anus
According to Dr. Pham Xuan Duy from the hospital, the anorectal malformation is quite rare with an incidence rate of about 1:5000 births. These people with anorectal malformation should undertake an operation as soon as they are detected because long-term treatment will cause great difficulties in daily hygiene.
Moreover, it will make the baby's large intestine easily inflamed, leading to loss of bowel function over time.
The eight-year-old girl from Quang Ngai Province’s Tra Bong District suffered anorectal malformation since birth but because of her difficult family condition, the family did not take her to medical centers. For eight years, the little girl could not live normally, she could urinate but did not have an anus to defecate; therefore she defecate through the vagina.
Lately, the little girl’s homeroom teacher helped took her to have an examination at the province’s Hospital of Obstetrics and Gynecology.
According to doctors, the girl was born with an imperforate anus, a congenital (present from birth) defect in which the opening to the anus is missing or blocked.
Right after that, the doctors performed an hour of emergency surgery to create an anus for the baby successfully. The baby's health is now stable.