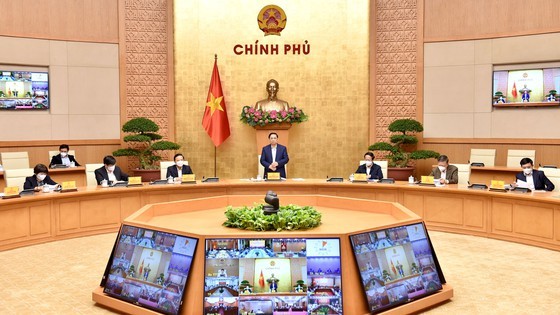 On November 20, Prime Minister Pham Minh Chinh, Head of the National Steering Committee for Covid-19 Epidemic Prevention and Control, chaired a nationwide online meeting of the National Steering Committee with the Steering Committees of 63 provinces and cities to evaluate the results of prevention and control of the Covid-19 epidemic in the past time and the discussion of tasks and solutions to prevent and control the epidemic as well as recovery and development of socio-economic in the coming time.
Also according to the representative of the MInistry of Health, outbreaks of Covid-19 have been recorded in densely populated areas, secondary infections outside the community, especially in localities with high population density, high trade and travel.
As of November 19, Vietnam has received 131.2 million doses of vaccine which has distributed 129.6 million doses. The remaining newly received vaccine 1.6 million doses are being tested. More than 106 million doses of vaccine have been administered.
Speaking at the opening of the meeting, Prime Minister Pham Minh Chinh said that the meeting was aiming to review the situation after more than a month of implementing the Government’s Resolution 128 and the Ministry of Health’s Decision 4800.
The Prime Minister asked the delegates to contribute ideas from the leadership practices from the localities to see what administrations have done and have not done and then, participants will together analyze the causes proposing additional measures and adjustment for the Resolution 128 and Guidelines 4800 for better performance in the coming time, especially in the organizational process. The implementation needs to be consistent across the country in order to both well implement the prevention and control of the Covid-19 epidemic, while recovering and developing safely and sustainably in the coming time. 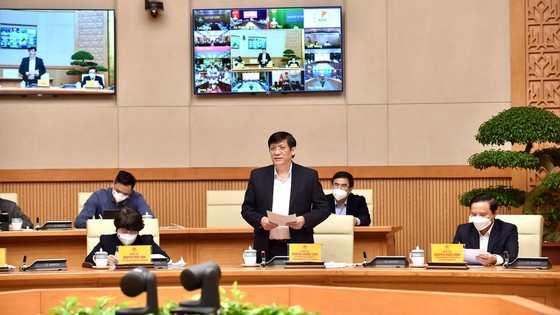 Health Minister Nguyen Thanh Long at the meeting (photo: VGP)
According to the Ministry of Health’s report, in the first more than one month of implementing safe, flexible adaptation and effective control of the epidemic according to Resolution 128 of the Government, the Southeast Asian country recorded 105,543 cases in the community.
Compared to the previous month, the number of cases in the community increased by 2.9 percent, but the number of deaths decreased by 46.3 percent and hospitalizations decreased by 25.3 percent. Moreover, the number of severe and critical cases decreased by 25.3 percent, down by 40.8 percent.
Furthermore, in the coming time, many chains of infection will possibly continue to be recorded and there is a potential risk of disease spread in the community, especially the present weather is favorable for the development and spread of the virus.
Up to now, 63 provinces and cities have announced their epidemic alert level on the website of the Ministry of Health. Forty-nine provinces and cities that have issued plans to implement Resolution No. 128/NQ-CP or documents for the epidemic prevention and control in production establishments and transportation firms. Amongst 63 provinces and cities, 25 provinces and cities have developed plans for administrative measures of all levels of epidemic while 24 provinces and cities only have had administrative measures for their current epidemic level.
The Steering Committee also pointed out some existing problems and obstacles in the past time when implementing Resolution No. 128/NQ-CP as some localities have not yet issued plans adapting to all four epidemic alert level or only plan for their current local epidemic level. Additionally, they have carried out testing and isolation for people returning from high-risk cities and provinces.
Yesterday night, the Ministry of Health announced 9,531 new Covid-19 cases in Vietnam on Saturday, plus a further 107 deaths. A further 16,773 patients were discharged from hospitals, taking the total number of recoveries to 900,337.
So far, Vietnam registered a total of 1,084,625 cases of Covid-19, of which 1,079,529 are the result of the fourth wave of infections that have swept the country since late April.