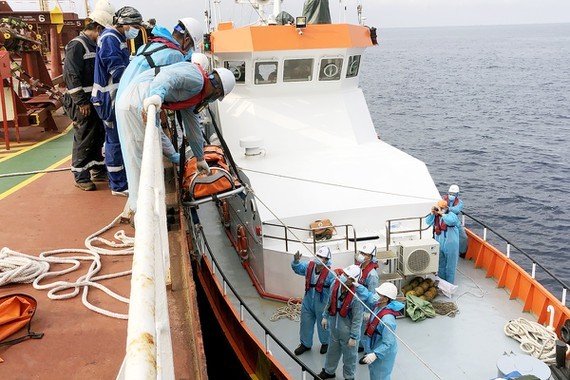 The rescue force approached the coal-carrying ship with two crew members having work accident while passing through Khanh Hoa waters. (Photo: SGGP)
Around 6 p.m. on May 16, two Filipino nationals, Villacencio Andrillo Baselote, 35, and Hamodiong Cresente JR. Salem, 31, were brought to the mainland by the SAR-01 ship of the Khanh Hoa Maritime Search and Rescue Coordination Center, then were transferred to the hospital.

Mr. Nguyen Xuan Binh, Director of the Maritime Search and Rescue Coordination Center Region 4, said that these two people were crewmen on a coal-carrying ship of Greek nationality. 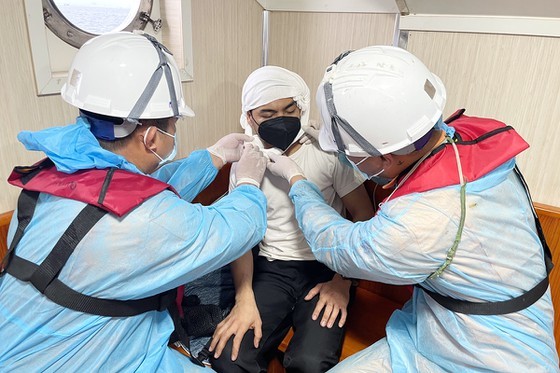 Medical workers check the condition of a crewman. (Photo: SGGP)
On the morning of May 16, the ship passed through Khanh Hoa waters, about 20 nautical miles from the shore of Nha Trang City. Two crew members had an accident while working, leading to head, flank, and arm injuries. 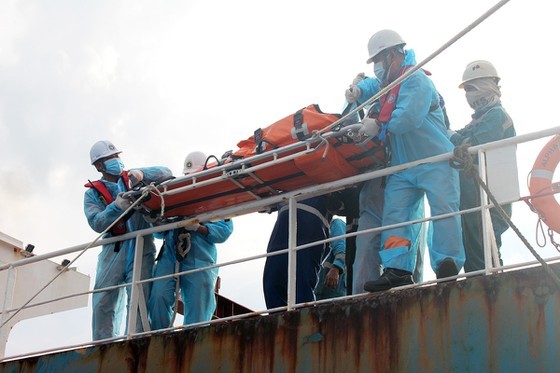 Staff of the Maritime Search and Rescue Coordination Center use stretchers to transfer patients to the SAR-01 ship and bring them to the mainland. (Photo: SGGP)
Despite being rescued by other crew members, these two crewmen were bleeding heavily, in poor health, and at risk of death. Therefore, the captain immediately contacted the mainland for help.

The Maritime Search and Rescue Coordination Center in Khanh Hoa immediately dispatched a large ship and a medical team to cross the sea to save lives.