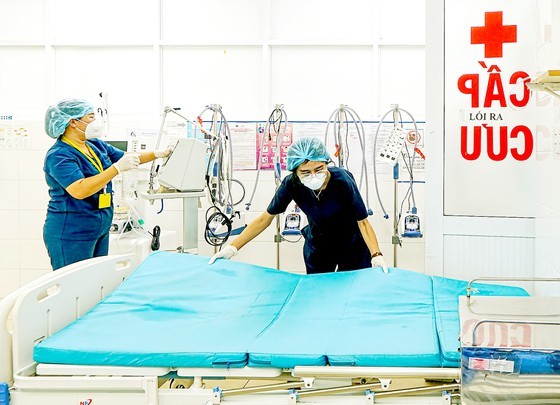 Medical workers of a hospital in District 7 are checking equipment before receiving patients with common diseases (Photo: SGGP)
For three months, 67-year-old Phan Thi Tran in Thu Duc City’s Linh Chieu Ward has not gone out to see doctors. Though she is suffering from type 2 diabetes and high blood pressure, she has not visited a hospital for fear of contracting Covid-19, she had no choice but she has had to take drugs from her old prescriptions.
For the past time, the Thu Duc City Hospital where she had visited before the pandemic has both provided treatment of Covid-19 patients and common illnesses. Therefore, because her children were afraid that she would catch the disease, they prevented her from going to the hospital.
Due to fear of catching Covid-19, 60-year-old Pham Tam Khoi in Binh Thanh District only went to Cho Ray Hospital for a medical examination when he couldn’t walk anymore. He was diagnosed to have with bone metastases referring to secondary or metastatic tumors that are formed from cancer cells that have broken away from primary lung cancer and spread through the lymphatic system or bloodstream to the bones.
Medical workers said that people delayed going to hospitals for examination for the past time due to fear of Covid-19. According to statistics, because of concerns about Covid-19, people had delayed or avoided medical care including urgent and routine care, the proportion of patients reduced by 40 percent – 60 percent compared to that before the pandemic. Consequently, their health problems had worsened.
For instance, while the hospital received patients again after a disruption, doctors of Thu Duc Hospital last week discovered the health condition of patients especially those with underlying medical conditions got worse as they had not been examined or taken the drug of old prescription; some of them were in critical condition requiring hospitalization.
The Department of Health of Ho Chi Minh City said that the department plans to gradually reduce concentrated isolation areas and makeshift hospitals at locations such as schools, dormitories. Besides, hospitals especially general hospitals in districts will receive and treat patients with common diseases.
Specifically, from September 22 to September 30, three general hospitals in green districts including District 7, outlying districts Can Gio and Cu Chi have returned to their original functions of treatment of common diseases.
Although these above-mentioned hospitals have not treated Covid-19 patients, hospitals still have an isolation area of 10-20 beds to isolate suspected cases and have oxygen tankers for prompt resuscitation of critically ill patients before transferring them to a hospital for treatment of Covid-19, said Dr. Nguyen Van Vinh Chau, Deputy Director of Ho Chi Minh City Department of Health.
These days, all medical staff in the hospital in District 7 have been spraying disinfectants in medical equipment and rooms to receive patients with common illnesses from September 30 after 2.5 months of providing treatment of Covid-19 patients.
Elsewhere in the city, several medical clinics have resumed their normal operation. For instance, the Hospital for Tropical Diseases opened rooms to receive HIV patients; the City Children Hospital started to give an injection to kids.