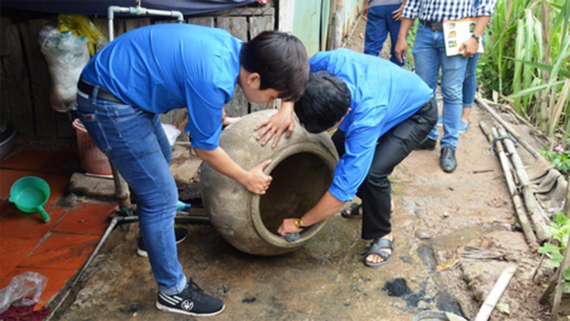 Youth activists turning over all water storage containers for prevention of mosquito laying eggs inside
On the afternoon of May 5, the Ho Chi Minh City Steering Committee for Covid-19 prevention and economic recovery held a press conference under the chairmanship of Deputy Head of the Steering Committee Pham Duc Hai.
It is extremely alarming that numerous other infectious illnesses have been on the increase. Therefore, before and after the holidays on April 30 and May 1, leaders of the health sector in Ho Chi Minh City and HCDC set up inspection teams on dengue prevention in districts and Thu Duc city to check how localities adopt the measure.
On May 5, the Department of Health of Ho Chi Minh City said that it had just had a working session on the prevention of Dengue hemorrhagic fever (DHF) and expanded vaccination in the outlying district Binh Chanh. According to the Health Department in Binh Chanh District, the number of dengue cases in the locality weekly decreased compared to the same period last year. However, from the beginning of April until now, the disease tended to increase and has recorded two deaths in the area.
Health delegation paid a visit to Vo Van Van Primary School discovering that there are many objects containing stagnant water where mosquitoes get inside to lay eggs such as old car covers, used plastic cups, lidless trash cans, and other waste items hidden in the tubs of trees on the campus of the school.
The delegation asked the school for cleaning of these containers and turning over all water storage containers and taught students about how to dispose of garbage in the right place as well as tightly cover water storage containers (buckets, cisterns, rain barrels) so mosquitoes cannot get inside to lay eggs.
The delegation also worked with the general hospital in Binh Chanh District on the organization of receiving, diagnosing, and treating dengue patients, and also suggested Binh Chanh District Health Department organize professional training for private clinics.
Also at the press conference, Mr. Phan Cong Bang, Deputy Director of the HCMC Department of Transport, said that since the Thu Thiem 2 bridge was open to traffic, an average of nearly 10,000 vehicles cross the bridge every day. Currently, the technical lighting system in the path to the bridge has been completed to ensure safety and properly put into operation.
The city has been seeking opinions from related agencies to create an artistic highlight for the Thu Thiem 2 bridge. As per schedule, this lighting system will be completed in 2022, said Mr. Phan Cong Bang.
Regarding the public concern where many people stopped their cars to gather on Thu Thiem 2 bridge to enjoy the scenery, Senior Colonel Le Manh Ha, Deputy Head of the Advisory Division under HCMC Police Department, said that when the bridge was put into use, people would enjoy sightseeing. This is a legitimate need. However, it is illegal for people to stop their cars on the scenic bridge in accordance with the Road Traffic Law.
According to current regulations, cars illicitly parking on the bridge will be fined VND2 million- VND3 million while with the same violation, motorbike drivers will be fined VND400,000-VND600,000 and bicycle riders will be fined VND80,000-VND100,000. The functional forces carry out patrols to remind people and intentional violators causing traffic jams will receive administrative fines according to regulations.