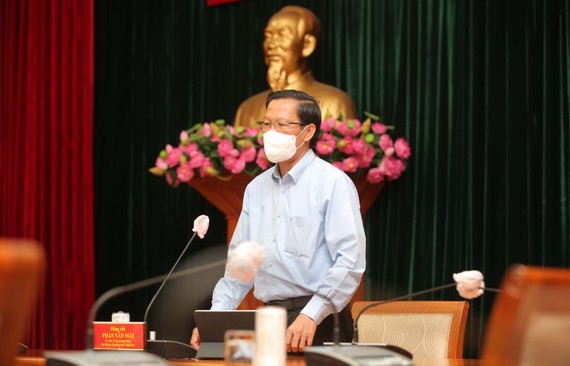 In his speech, Deputy Secretary Phan Van Mai once again stated that vaccination is the key factor to help HCMC go back to the new normal status. Therefore, besides the allocated doses, the city has proposed that the Government allow it to seek other sources of vaccine purchases on its own.

Until now, HCMC People’s Committee has signed hundreds of memorandum of understanding regarding vaccine provision with partners. The city has received a total of 2.5 million doses of four vaccine kinds of AstraZeneca, Moderna, Pfizer, and Sinopharm Beijing (using Vero Cell technology). All of them are approved by WHO and the Vietnamese Health Ministry.

1.8 million of those doses have been safely vaccinated on the transparent and voluntary basis, divided into many rounds. HCMC gradually speeds up its progress thanks to the capacity increase.

As to the latest received vaccine, Sinopharm Beijing, the Health Ministry at the moment is checking its quality. “Once approved, this batch will be used like other kinds, also based on the transparent and voluntary principle”, said Mr. Mai. Information on these vaccines can be easily found on the official website of the Health Ministry.

To achieve the herd immunity goal as soon as possible, HCMC is re-organizing its vaccination forces to reach the capacity of vaccinating 300,000 people per day. As such, with a stable vaccine source, the city can achieve the goal easily.

HCMC is calling for the cooperation between state and private forces while giving more power to each district so that they can be more flexible in their vaccination campaigns, as long as the organization of these programs can ensure safety, logic, and schedule maintenance.

With this capacity, the municipal authorities are asking the Government for an additional allocation to have around 5.5 million doses this August. Meanwhile, the city is seeking partners to obtain more vaccine to serve its residents. Predictably, the sources will be more surplus from the third quarter and herd immunity can be reached at the end of this August.

Deputy Secretary Mai shared that if all non-city dwellers come back to their hometown now, it is challenging and even impossible for those provinces to assign sufficient accommodation for their quarantine time. As many provinces are also under Directive 16 of the Prime Minister, he suggested that these people calmly stay here.

Mr Mai affirmed that in this harsh time, the city is trying its best to mobilize all possible resources from state funds and the reserved fund of HCMC to charity help to ensure that no one is left hungry.

To fulfill that promise, the city has established many centers in district and ward levels to accept relief items, to list all vulnerable households in the neighborhoods, and to designate the human resources from voluntary people and community organizations in order to distribute essential goods to those in need. Obviously, this is not a short-term task but the one lasting 1-2 months or even longer.

As to questions related to the social security package as stated in Resolution No.09 by HCMC People’s Council, the Deputy Secretary said that there is a difference between the list of eligible citizens for the 886-billion-VND package by HCMC and the 26,000-billion-VND by the Government.

At present, all wards in the city must review all vulnerable people in their neighborhoods that have not been listed in the above programs. These people will also receive financial support. However, as the quantity is quite large, there may be a slip happening in certain areas. Thus, Vice Secretary Mai hoped that anyone in trouble or seeing people in trouble can contact the authorities using the hotline 1022 for timely care delivery. 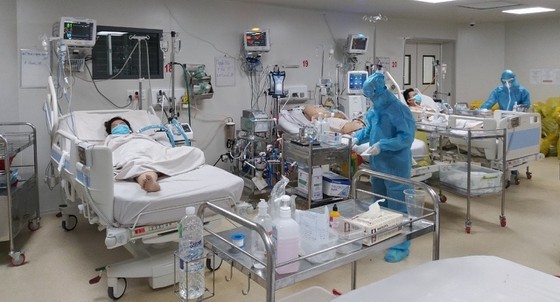 Covid-19 patients under treatment in HCMC Hospital for Tropical Diseases

One of the most critical issue at the moment in HCMC is the treatment of severe F0 cases. The city so far has urgently prepared medication, medical equipment, and capable human resources while applying the five-level patient allocation. District-level hospitals are now divided into two parts, one of which is saved for the treatment of mild F0 cases and emergency situations.

Sadly, as the number of F0 is still quite high, there exists a sign of overloading medical equipment and staff. The city is upgrading its healthcare capacity day by day in order to care for more patients and adjust illogical points to minimize F0 cases turning worse and deaths. However, in certain areas, hospitals still cannot answer the demands of residents in the neighborhood timely due to their limits.

Regarding which stage in the treatment process to have the most deaths, Deputy Secretary Mai shared that it is impossible to deliver a convincing answer since statistics are insufficient for analysis. Nevertheless, it seems, the patient reception stage and the treatment at level three still face several challenges owing to material limitation and human resources shortage. This must be fixed as soon as possible.

HCMC has asked the Special Task Force of the Health Ministry to support in creating a link between the three levels of three, four, and five so that doctors can deliver suitable treatments to reduce the cases of F0 turning worse and deaths.

In the new treatment strategy, it is more important to focus on the quantity of patients being received, the quantity of recovered or turning-worse people among them, and deaths, so that more sensible solutions can be applied to alleviate the situation.

By Manh Hoa, Thanh An – Translated by Thanh Tam