These 25 people comprise members of a religious sect at 415/8/4 Nguyen Van Cong in Go Vap District and their close contacts.
Sai Gon Giai Phong Newspaper previously reported that, late on May 26, the city recorded three suspected cases of Covid-19 infection with one person residing in Hoc Mon district, and two others in District 12. 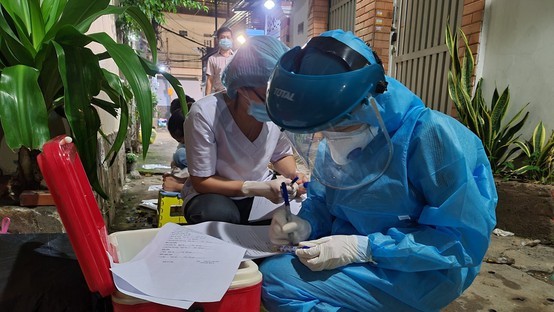 Medical workers take samples for Covid-19 testing at the religious mission in Go Vap District
All three people had symptoms of respiratory infection and went to see doctors. They were screened and transferred to isolation at the hospital and took samples for testing with suspicious results. The same night, the test results confirmed that they were positive for SARS-CoV-2.

Through initial investigation, the three people belong to a religious mission at 415/8/4 Nguyen Van Cong in Go Vap District.
HCDC has coordinated with district health centers to urgently make a list of people of the religious mission for isolation and take samples for testing during the night. At the same time, health workers promptly applied tracing measure to all contacts of these people.
Up to now, 27 people in 7 districts have been brought to concentrated isolation areas.
As of 7 a.m. on May 27, emergency testing resulted in additional 10 suspected cases, bringing the total number of suspected cases to 13, all belonging to the religion mission.

By Thanh An - Translated by Dan Thuy