Head of the hospital’s Department of Neurology Dr. Vo Van Tan revealed that to get the World Stroke Organization’s golden status, the hospital has invested in state-of-the-art medical equipment as well as sent medical workers to other hospitals abroad and in the country. The decreased treatment window and the percentage of patients receiving treatments in the golden hour have risen. 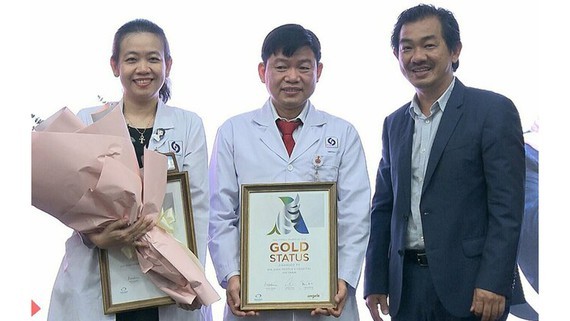 The hospital is one of the three first hospitals in the southern metropolis applying an IV injection of recombinant tissue plasminogen activator (tPA), which works by dissolving blood clots and improving blood flow to the area of the brain being deprived of oxygen. For years, the hospital has applied the gold standard treatment for ischemic stroke like other countries in the world.
In 2020, the hospital admitted roughly 1,600 stroke patients; approximately 16 percent of them were taken to the hospital in the golden window; therefore, they have seen a good recovery.
The prestigious WSO award is for stroke centers around the world meeting strict requirements in training, equipment, and the treatment of acute strokes, among other matters.
The WSO Angels Award is part of the Angels Initiative, launched by Boehringer Ingelheim, which engages hospitals to improve the quality of stroke care through continuous training and consultations. The award is divided into three levels including Gold Status, Platinum Status, and Diamond Status.

By Thanh An - Translated by Uyen Phuong