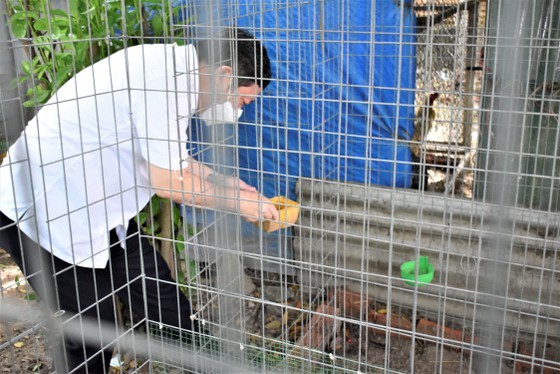 Vice Chairman of the People's Committee of Ho Chi Minh City Duong Anh Duc checks the poultry farming area of a household in Hoc Mon District. (Photo: SGGP)
In Thoi Tam Thon Commune in Hoc Mon District, the delegation noted that many places with high risks of dengue fever had not been handled, and local people remained subjective and neglectful about the dengue fever epidemic. In Thoi Tam Thon Commune in Hoc Mon District, around the boarding houses in Group 125, Tam Dong 3 Hamlet, the delegation found many water containers containing wrigglers around residential areas. Noticeably, just over one month ago, there was a case of death due to dengue fever in this area. Tran Thi Nhung, a resident in Group 125, said that when she heard someone had died from dengue fever, her family members bought more mosquito sprays but still did not sleep under mosquito nets because they were not familiar with it. 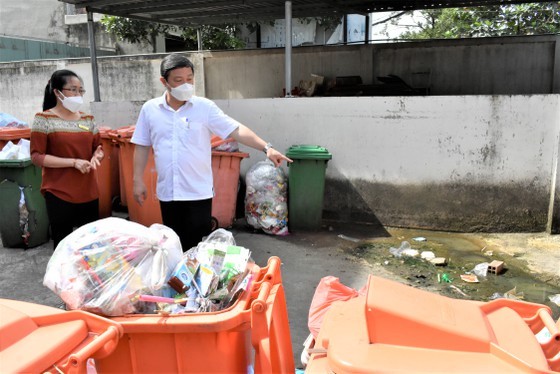 There are puddles at garbage storage area in Tam Dong 3 Primary School in Hoc Mon District. (Photo: SGGP)
Explaining why Hoc Mon is one of the five localities with the highest number of dengue fever cases in HCMC since the beginning of the year, the Vice Chairman of the People's Committee of Hoc Mon District said that Hoc Mon District has over 50% of agricultural land. Some households still store water in jars and ponds for livestock raising and watering ornamental plants, unintentionally creating a favorable environment for mosquito breeding and development. Meanwhile, the inspection and handling of places with high risks of dengue fever in districts, communes, and townships has not been regular, and local authorities have not resolutely fined households that do not comply with preventive measures against the dengue fever epidemic. There is a shortage of staff to carry out dengue fever prevention and control at the medical centers at commune and town levels while the epidemic is complicated with a high workload, requiring quick handling; there are not enough people to participate in killing wrigglers. 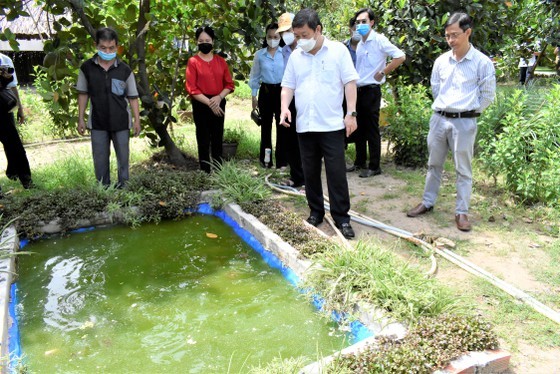 Vice Chairman of the People's Committee of HCMC Duong Anh Duc asks the managers of September 2nd Kindergarten in Thoi Tam Thon Commune to regularly change the water in the pond in order to kill mosquito larvae. (Photo: SGGP)
Dr. Le Hong Nga, Deputy Director of the HCMC Center for Disease Control (HCDC), recommended that when there is a cluster of dengue fever and death from dengue fever, local health authorities must proceed with mosquito spray and clean the environment regularly within a radius of 200 meters; people use mosquito repellent sprays, incense, and cream, wear long-sleeved clothes and sleep under mosquito nets even during the day to avoid mosquito bites. The fact that the area with garbage and water containers is not cleaned will cause the disease to spread widely.

Deputy Director of HCMC Department of Health Nguyen Huu Hung also acknowledged that people were still subjective and local involvement in epidemic prevention had not been drastic. Leaders of Hoc Mon District need to direct closely the prevention and control of dengue fever, minimizing the number of dengue fever cases and deaths in the area.