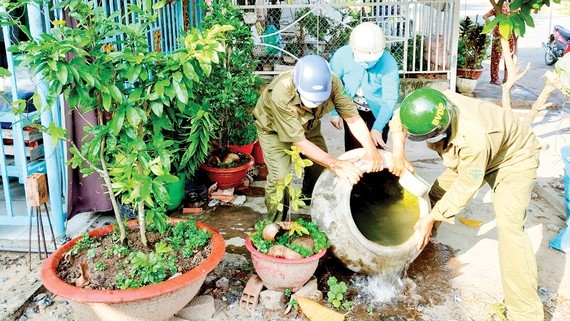 Killing mosquitoes and mosquito larvae in residential areas and households
According to the Center for Disease Control of Dong Nai province, the province recorded over 1,500 cases, including two deaths. The rate of dengue in children accounted for more than 70 percent.

Binh Duong Province reported 1,940 dengue cases in the first four months, presenting a year-on-year decrease of 27.5 percent, including 122 severe cases, and five deaths. The rate of dengue in children accounted for 77 percent.
Director of the Center for Disease Control of the Mekong Delta City of Can Tho, Huynh Minh Truc said that the city has implemented dengue prevention and control activities in districts and coordinated with Children’s Hospital of Can Tho City to organize training courses on dengue fever and preventive measures for healthcare facilities. The city saw 332 dengue cases and a sharp increase in dengue fever cases among children.
The number of dengue cases of the Mekong Delta provinces of Dong Thap and Ben Tre were 589 and 51 respectively.