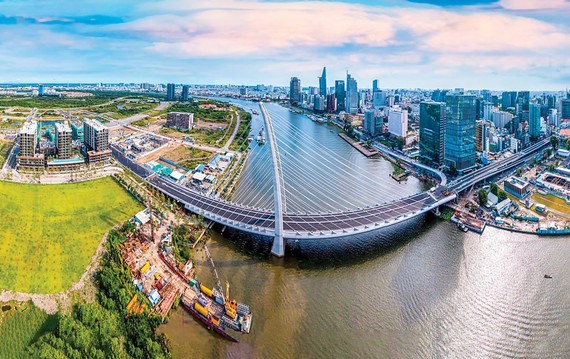 Opening of the Thu Thiem 2 bridge to traffic will create an infrastructure impetus for Ho Chi Minh City.

Up to now, most industrial production enterprises in the city have resumed operations. Notably, some FDI enterprises have started looking for domestic suppliers to replace foreign enterprises. This is considered a good opportunity for domestic supporting industry enterprises to deeply participate in the global supply chain and increase their competitiveness.

Another indicator that is also demonstrating the recovery speed of Ho Chi Minh City enterprises is export turnover. In 2021, due to the heavy influence of the Covid-19 epidemic, the export turnover of HCMC enterprises only grew by 1 percent, while most of the main export markets had a decrease in turnover.

In the first months of 2022, the situation prospered when the total export turnover of goods of City enterprises in the first four months of the year reached US$13.9 billion, up 3.6 percent over the same period in 2021.

Amongst commodities, the number of items with strong growth rates such as electronics and components increased by 20.2 percent, textiles and garments increased by 88.2 percent, and vegetables and fruits increased by 103.4 percent. Regarding import turnover, the city’s total import revenue in the first four months was estimated at $36.4 billion, up 122.6 percent over the same period last year.

Commenting on the growth rate of imports in the first four months of the year, Ms. Le Huynh Mai, Director of the Department of Planning and Investment, said that the growth rate of imports higher than exports is a positive sign for domestically produced commodities. Enterprises have increased imports to accelerate production recovery after many months of being affected by the Covid-19 pandemic, preparing to produce for export orders in the following months.

In this general trend, Ho Chi Minh City's tourism is also gradually recovering, especially when Vietnam officially reopened tourism on March 15. In April alone, the total revenue of the city's tourism service industry was estimated at VND 8,761 billion, up 26.7 percent. Roughly 1.97 million domestic tourists to the city were estimated to up 56.7 percent while more than 114,728 international visitors to the city posted an increase of 100 percent compared to the same period in 2021.

Especially in the 4-day holidays for April 30 and May 1, the number of visitors at the amusement parks in the southern metropolis reached 420,000 meanwhile guests staying at accommodation establishments were estimated at 95,000 and occupancy rate of hotel rooms and accommodation room was about 70 percent, total revenue in the 4 day holiday was about VND1,610 billion. The southern largest city also launched many new products, in which the tour to see the city from above by helicopter attracted many visitors.

Currently, the city is preparing to launch a boat tour on the Saigon River. It is expected that with constant efforts, the city's tourism will accelerate strongly, promoting the development of other service industries.

Despite the strong recovery, HCMC's economy is also facing many challenges, one of which is the signal that inflation is starting. At the press conference on the socio-economic situation on April 28, Mr. Tran Anh Tuan, Deputy Director of the City Department of Planning and Investment, shared some notable information including 8 percent of the disbursement rate of the city's public investment capital in the first 4 months of the year.

Mr. Tran Tuan Anh commented that the rate is very low, although there is a chain of connections in production and construction activities, the development has just started to prosper, not fully recovered after the epidemic. The sudden increase in raw material prices led to increased prices of many construction materials such as sand, stone, cement, or logistics transportation; worse, inflation has a signal to start.

Previously, in the first quarter, the average consumer price index increased by 1.51 percent, nearly 2 times that during the same period whereas in 2021, it increased by only 0.84 percent.

The problem of the sharp increase in the price of raw materials and transportation is pushing many businesses into a difficult position when their profits are not as expected due to great pressure from production costs, and at the same time makes consumers more cautious in spending when commodity prices are in an uptrend.

Looking back at the city's April figures, it can be seen that the total retail sales decreased slightly by 0.46 percent compared to the previous month, mainly due to the volatile price of raw materials, gasoline, gold, and silver in March, affecting prices as well as revenue of many product groups.

In the short term, the city is facing long-term challenges. Specifically, the export growth rate of the city is recovering compared to 2021, but looking beyond it is worrisome.

At a seminar to discuss how to solve difficulties for import-export enterprises in early 2022, a representative of the Ho Chi Minh City Department of Industry and Trade assessed that the top five localities with the largest export turnover in the country including Ho Chi Minh City, Bac Ninh, Thai Nguyen, Binh Duong, and Dong Nai. Nevertheless, Ho Chi Minh City's exports are decreasing over time. In 2010, the city led the country in export with a turnover of $22.47 billion, at that time the export turnover of Bac Ninh province was only $2.45 billion. In 2021, Bac Ninh's export turnover was close to $44.8 billion but the HCMC only reached $44.9 billion.

According to the Department of Industry and Trade, after 10 years, Bac Ninh's exports have basically caught up with Ho Chi Minh City. The spectacular rise of the northern provinces of Bac Ninh and Thai Nguyen is due to the attraction of large FDI enterprises in the electronics sector, while the southern provinces of Dong Nai and Binh Duong are based on attracting investment and expanding industrial zones. However, Ho Chi Minh City cannot expand industrial parks because it is short of land fund.

In addition, investment attraction to the high-tech sector is also inadequate, while the attraction of high technology plays a special role in export development.

Along with exports, tourism development is also a challenge in the future. Over the past time, the city's tourism industry has made great efforts in organizing tourism events, connecting activities as well as launching new products. It is a regret that Ho Chi Minh City was not named in the list of 10 provinces/cities attracting the largest number of tourists during the holidays of April 30 and May 1.