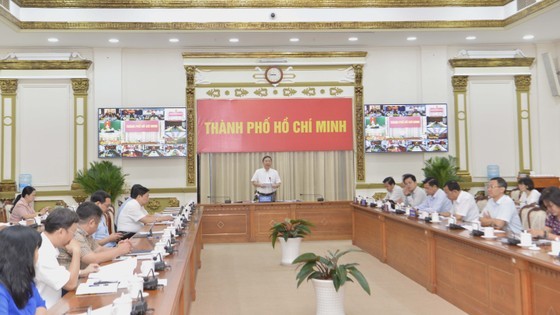 He made the statement at the eighteenth online meeting with 63 provinces/cities across the country according to Official Dispatch No. 148 dated October 31, 2022, of the Office of Government today held by the National Steering Committee for Covid-19 Prevention and Control.

At the meeting, Mr. Duc also proposed to the Prime Minister to direct the Ministry of Health to soon supply the shortage of vaccines to the southern largest city.

According to Mr. Duc, from May 2022 until now, the supply of expanded immunization vaccines from the National Immunization Program has been interrupted. Specifically, the measles and diphtheria-pertussis-tetanus (DPT) vaccines have been discontinued since May; subsequently, Ho Chi Minh City no longer has these two vaccines while measles-rubella (MR) vaccine expires on October 6, vaccines against Japanese encephalitis (VNNB) and oral polio have been exhausted since the end of October and tuberculosis vaccines and DPT-VGB-Hib vaccines are expected to expire in mid-December 2022.

At the same time, he added that the Department of Health has proposed to the Ho Chi Minh City National Assembly Delegation, requesting the Ministry of Health to soon supply a full range of vaccines under the expanded vaccination program, which is prescribed in Circular 38/ 2018/TT-BYT promulgates the list of infectious diseases, scope and subjects subject to the compulsory use of bio-medical vaccines.

Following the interruption of vaccine supply from the Ministry of Health, Vice Chairman Duc revealed that the city must implement many temporary solutions to overcome the above situation such as: Directing the Ho Chi Minh City Department of Health to guide medical stations to set up a list of unvaccinated children who will be vaccinated as soon as vaccines are available. Children who have reached 12 months but have not been injected with the first shot of vaccine against measles. Health workers can advise rich parents to take their children to private medical clinics for paid vaccines.

Nevertheless, Vice Chairman Duong Anh Duc also cautioned that if the supply interruption of vaccines continues, children in the city are at risk of some dangerous diseases such as measles, diphtheria, and pertussis. Amongst them, measles is the disease with the highest and earliest risk because according to the health sector's record, the measles epidemic in our country usually occurs every 4 years.

Besides, with the appearance of new sub-variants of Omicron and dengue fever, Ho Chi Minh City continues to face many difficulties, challenges and the risk of shortage of drugs, medical supplies as well as a shortage of medical workers.

Vice Chairman Anh Duc proposed to the Prime Minister to direct the Ministry of Health to soon supply vaccines which Ho Chi Minh City is presently short of.

However, many residents didn’t want their children to be vaccinated with the Covid-19 vaccine, along with the lack of some other vaccines; consequently, obese children, especially children aged 5 and unvaccinated children under the age of 12 are at high risk of contracting the disease.

Approximately 20,903,343 people aged 18 and over got first shots, second shots, additional shots, and boosters of the Covid-19 vaccine

Regarding the number of Covid-19 cases, Vice Chairman Duc disclosed said that in October, the city reported 1,171 new cases of Covid-19 while it was 2,243 cases in September. From the beginning of the year to October, the total number of cases announced was 116,377 including 409 from overseas countries.

The number of hospitalizations in the last week of October was 159, up 35 cases compared to the previous week, an average of 23 admissions per day. As of the end of November 3, some 424 people were under home isolation while 162 people were being treated at hospitals; worse, 44 of them were severe.

In addition to dengue, the city recorded 17,091 cases of other infectious diseases such as hand, foot, and mouth disease, up 75.3 percent over the same period in 2021 without deaths so far this year. However, the city detected two cases of monkeypox who had been in contact with infection cases abroad.