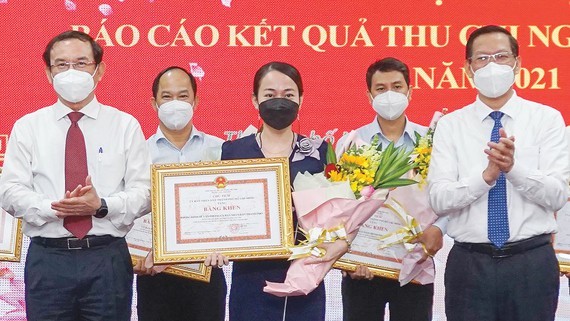 Speaking at the conference, Chairman of the HCMC People's Committee Phan Van Mai emphasized that in 2021, in the context of a prolonged Covid-19 pandemic, the city must fight the pandemic, restore economic production, and support citizens at the same time. However, HCMC's financial industry still strived to collect VND381.53 trillion, achieving more than 104 percent of the estimate, up 2.7 percent year-on-year. It was a great effort of the city’s financial industry. Although the city had to reduce and extend tax payments, leading to a decrease in budget revenue, it managed to balance and arrange the financial support package of over VND17.8 trillion during the pandemic.

On this occasion, the municipal People's Committee also honored and awarded certificates of merit to 61 departments, Thu Duc City, districts, and enterprises that had made great contributions to the budget and were active in budget collection activities.