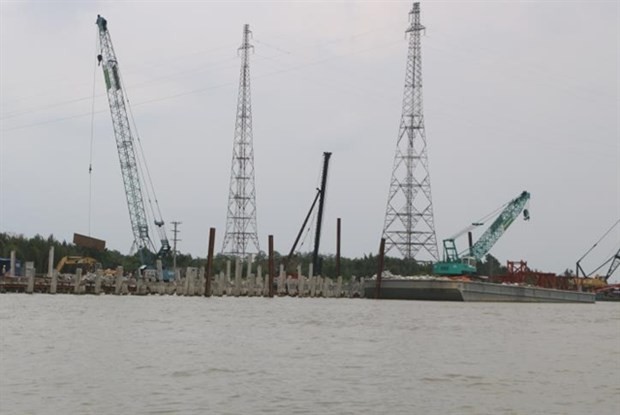 A coastal area in HCMC’s Can Gio district. (Photo: VNA)

Mai stressed that the Can Gio international transshipment port project is not only meaningful for the benefits of the seaport but also enhances the competitive advantage of the Southeast region, creating more attractiveness for foreign direct investment (FDI) inflows.

Located in Thi Vai maritime channel, Can Gio has deep water, is not seriously affected by waves or winds, and is ideal for international container transshipment.

Along with natural and economic factors, the cooperation of large global shipping lines is also essential for success.

The city plans to carry out the project’s construction together with the Vietnam Maritime Corporation (VIMC) and Mediterranean Shipping Company (MSC) - the world's second-largest container shipping company.

VIMC and its subsidiary, Saigon Port, have joined with foreign partners to flesh out the details of cooperation, investment and operation.

Saigon Port and MSC have studied the proposed site of around 570 hectares with a main wharf of 7.2km and a capacity to berth ships of up to 250,000 tons.

The project has a designed capacity of 15 million TEUs. The two sides are working hard with foreign partners to finalize plans for investment and operations.

By taking advantage of the deep water channel at the Can Gio estuary, construction of the port is expected to maximize the role of seaport group No. 4 comprising five ports in HCMC and the southern provinces of Dong Nai, Ba Ria - Vung Tau, Binh Duong and Long An.

It will use investment capital from domestic and foreign enterprises with high feasibility because the investor is one of the world's leading shipping carriers.

The city has been perfecting policies and institutions to create a driving force for the region’s development, bringing the region into a new stage of development and making a great contribution to the country’s industrialization and modernization process by 2045.

According to statistics from VIMC, in 2021, the volume of container goods passing through the country's ports, mainly in HCMC, Ba Ria-Vung Tau province and Hai Phong city, was 23.9 million TEU, but international transshipment was relatively low.

The construction of container ports is imperative to meet the city’s trading needs.