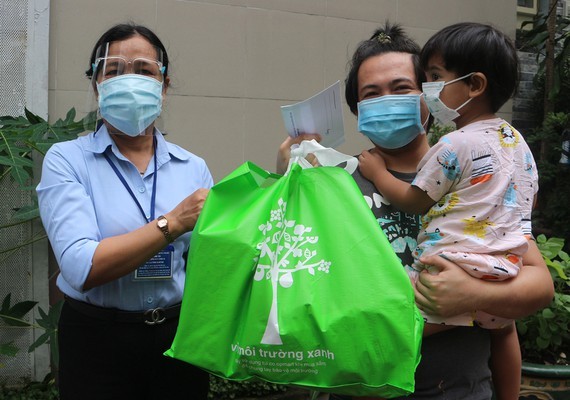 A representative of Thu Duc City authorities gives gift to a foreigner in the city (Photo: SGGP)
Murat Kaymakcigglu with Turkish nationality at 71/5, Street No.8 in Thu Duc City’s Truong Tho Ward is an English teacher. Taking a long break from work, he has wiped out his savings during the pandemic plus he has severe asthma. The administration in Truong Tho ward encouraged his landlord to give him a free-of-charge room. Moreover, medical workers have treated him.

Recently, the Vietnam Fatherland Front Committee of Thu Duc City has encouraged and given him a food bag worth VND500,000 and VND2 million in cash. In addition, he was given an additional sum of VND3 million by a volunteer of the Rapid Response Team to support foreigners in Thu Duc City, along with medical equipment to help treat asthma. Murat Kaymakcigglu also received the first dose of the Covid-19 vaccine. He said he was happy as the locality has given support to him during the pandemic; adding that he is lucky to live in Vietnam.

Many other localities such as Tan Binh District, Phu Nhuan District also have many activities to take care of and support foreigners who are foreign language teachers, those working in tourism who are living difficultly. Up to now, the Fatherland Front and wards in Tan Binh District have given away 133 support bags worth VND50 million (US$2,192). Additionally, foreigners have been inoculated with the Covid-19 vaccine.

Trinh Thi My Hue, Vice Chairman of the Vietnam Fatherland Front Committee in Thu Duc City, said that from August 19 to now, the unit in coordination with the Thu Duc City Police has given gifts to foreigners in the city each worth VND2.5 million.

The Vietnam Fatherland Front Committee of Thu Duc City also set up a team comprising of three volunteers who can speak English, Chinese and Japanese to support foreigners affected by the Covid-19 epidemic. Thereby, foreigners have called the team asking to buy food and provide medicine for them.