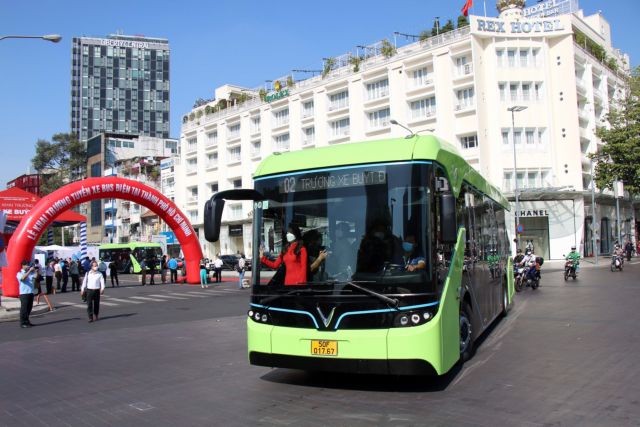 An electric bus on a trial run in HCMC . — VNA/VNS Photo

Developing electric vehicles is an inevitable trend to achieve environmental objectives under the city’s green traffic development project, according to the department.

Tran Quang Lam, director of the department, said the city plans to build six BRT routes with a total length of about 100km.

Funded by the World Bank (WB), the green traffic development project involves the construction of a 23km-long BRT main corridor. The corridor will run from An Lac Intersection in Binh Tan District to Rach Chiec Bridge in Thu Duc City.

Over the past 10 years, the city has had buses that use compressed natural gas (CNG) accounting for about 20 per cent of the total number of vehicles in operation.

To meet its sustainable growth targets by 2030, it would be necessary to implement appropriate vehicles for the BRT route as well as the city's public transportation system in general, he said.

The BRT No. 1 project initially planned to use CNG buses on the route.

The department has consulted scientists and WB experts to advise selecting vehicles for this project.

WB expert Shige Sakaki said electric buses have become a viable option as they have been used in many countries.

Besides reducing noise and toxic emissions compared to diesel buses, the operation and maintenance of electric buses are also cheaper.

However, developing electric buses still has some limitations such as high production costs, and a lack of charging station infrastructure and maintenance shops, according to the department.

The city has piloted two electric bus lines, using 12-seat mini buses, in districts 1 and 7 since 2017.

The city has also allowed the use of electric vehicles with fewer than 15 seats in Can Gio District to take tourists to hotels and tourist sites.

In 2020, the city administration approved a VND400 trillion (US$17.3 billion) project to improve access to public transportation and limit the use of personal vehicles over the next decade.

The focus will be on developing the bus network, including enhancing inter-provincial connectivity.

Under the project, public transportation would meet 15 per cent of residents’ travel demand by 2025 and 25 per cent by 2030.

To improve bus services and increase ridership, the department is expected to open public bidding for bus routes.

Priority will be given to vehicles that use clean and environment-friendly fuels such as CNG, LPG and electricity.

The quality of human resources operating buses will be improved and the management and operation of public transport systems will be modernised.

Every year, the city provides subsidies of VND1 trillion ($43 million) to bus companies.

A new inter-provincial bus route connecting HCMC and the provinces of Long An and Tien Giang officially opened on August 10.