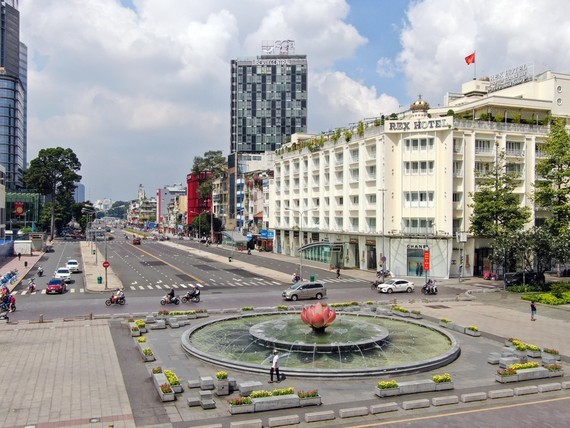 The downtown of HCMC. (Photo: SGGP)

HCMC's socio-economic recovery and development program for the period 2022-2025 set the end of 2022 as the goal for the period of recovery and restoration of disruption in the production chain and resumption of production and business activities so that the city would focus all resources to promote the strengths of the city from 2023, said Mr. Phan Van Mai.

From the sharp drop of -24.97 percent and -11.64 percent in the third and fourth quarters of 2021, respectively, in the first six months of 2022, the city's economy grew by 3.82 percent. Growth is expected to surpass 6.5 percent by the end of the year. Budget revenue in the first eight months of the year is estimated at nearly VND311.9 trillion, reaching nearly 81 percent of the year estimate, up 21.34 percent over the same period. This strong recovery is beyond the initial expectations of the city. It shows that the recovery process is on the right track, policies to support businesses have promoted positive effects, and socio-economic activities have returned to same as before the Covid-19 pandemic. Especially, commercial and service activities become vibrant when a large number of tourists return to the city. HCMC has great prospects to complete the recovery target in 2022, creating acceleration for 2023 and the following years.

To achieve recovery results that are beyond expectations, it is the efforts of the public servants, the business community, and each resident in HCMC. However, over the first eight months of the year, it can be seen that there are still many obstacles on the way to recovery and development.

The biggest bottleneck is the obstacles and sluggishness in administrative procedures that have hindered the cash flow into production and business, job creation, and economic value. Disbursement of public investment capital - a precious capital flow to improve infrastructure and attract investment capital from the whole society - has also been extremely low in the past few months, HCMC only disbursed 26 percent of the plan in the first seven months of the year.

There is a huge role of administrative reform here. The administrative reform indexes of HCMC last year were low and relegated. This shortcoming is partly the responsibility of public officials and servants. Psychological apprehension and caution make it difficult for civil servants to break through and be creative; coordination between departments, districts, and Thu Duc City has not been smooth. These are all major problems that HCMC must focus on overcoming on the upcoming journey heading to recovery and development, not to mention the difficulties caused by the impacts of the world situation. Conflicts, economic crises, and disruptions in the global supply chain affect the prices of raw materials, fuel, materials, and markets, prompting the economic recovery and development process of the city to be more challenging.

The economic recovery process is also a great opportunity for districts, Thu Duc City, and HCMC to strongly restructure the economy towards high added-value and establish centers of the creative economy and knowledge economy, and high-tech industrial parks. For example, downtown areas like District 1 can take this opportunity to strongly restructure towards commercial services, creating a much higher economic value. At the same time, it can build a civilized downtown area with an effective urban management method like Singapore. Farther areas, such as Cu Chi District, are also reoriented, becoming an important component of the Northwest Urban Cluster, developing specific advantages in hi-tech agriculture, river and canal system, and traditional, historical, and ecological tourism.

In that restructuring process, HCMC also focuses heavily on digital transformation so that the direction, administration, and service of people and businesses are smooth, transparent, and based on a highly reliable database. In which, HCMC develops the function of directing, operating, and sending messages to remind handling of complaints and petitions of people through Portal 1022; prioritize resources to deploy the unified information system to handle administrative procedures in HCMC, expected to be completed in October 2022. With this system, people do not have to declare again information that is already in the national database on population. It is also possible to perform public services online.

To remove obstacles, HCMC has also promoted further the role of the working group on investment. The working group was established in June 2021. So far, the team has disentangled many projects. For example, the issuance of certificates of apartments, thereby ensuring the legitimate interests of tens of thousands of people. Recently, the city has also set up a steering committee to deal with outstanding issues and problems.

These are strong solutions, showing the determination of the leaders of HCMC in making a significant change, bringing a new spirit after two years of struggling to fight against the pandemic with many losses, as a foundation for solid growth in the future.

A corner of HCMC (Photo: SGGP)
HCMC has been urgently summarizing Resolution No.16 of the Politburo on the direction and tasks for the development of HCMC to 2020; Resolution No.54 of the National Assembly on piloting specific mechanisms and policies for the development of HCMC. These are all major policies, in which the Central Government sets high expectations for HCMC, and at the same time, creates a broader legal framework than the common ground for the city to develop properly. Over the past nearly five years, the city has implemented Resolution No.54 in extremely difficult conditions, so the effect is merely at the first stage. When formulating the new Resolution, HCMC has collected opinions from experts and leaders of different periods, who all expect the city will actually accelerate and make a breakthrough with a more appropriately-decentralized, thorough, modern management model. At the same time, it is a more open condition for budget autonomy, specific policies for science and technology and talent attraction, financial center development, construction of projects on urban and transport infrastructure, digital transformation, and human resource development strategy for socio-economic development in a new direction. These valuable opinions, along with the advice and consideration of the central ministries on the new draft resolution, when approved by the Politburo and considered by the National Assembly, will be a solid platform for HCMC to truly grow as desired by the citizens - for the whole country and with the whole country. Over the past few years, the whole political system of HCMC has made great efforts, from fighting the pandemic to the stage of recovery and development. However, the city’s leaders are also aware that there are many issues that citizens expect the city’s leaders to do more and resolve more drastically to quickly bring in concrete effects. With more than 18,500 houses on and along the canals, the city has been studying to build an implementation mechanism, with the goal that by mid-2025 - right on the 50th anniversary of Reunification Day - to basically erase houses on and along the canals. Not only this program, but many specific projects and programs, the city has also set out steps and roadmaps and looked for new breakthrough solutions to remove obstacles and speed up progress. To celebrate the 50th anniversary of Reunification Day, HCMC will also choose to carry out 50 major projects. Similarly, each district and Thu Duc City will also select 50 works of practical significance to perform. Mr. Phan Van Mai emphasized that HCMC is a special city, a major center of economy, culture, education and training, science and technology, and a hub for international exchange and integration. It holds a central position in linking the Southern Key Economic Zone. In the moments when the city had faced a life-and-death battle with many difficulties, the city overcame it together, thanks to the solidarity and consensus of each citizen and the business community. Now, when normal life has returned, citizens should continue to stick together with a more self-sacrificing spirit to make up for losses in the past time and build a prosperous life for themselves, their families, and the community, contributing to helping HCMC and the country continue to develop.
By Mai Hoa – Translated by Gia Bao