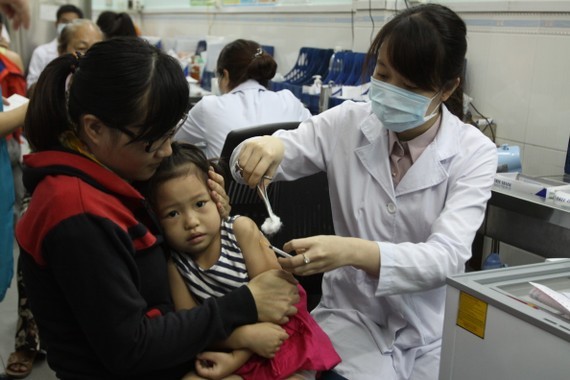 HCMC receives doses of vaccine less than its estimate

Moreover, roughly 5,140 doses of the DPT (diphtheria - pertussis - tetanus) vaccine with an expiry date of December 17, 2022, was given to the southern largest city by the National Expanded Immunization Program. Nevertheless, this number of vaccines is only enough to use in December 2022,

Currently, the average demand for the SII vaccine in Ho Chi Minh City is 8,820 doses per month and it is likely that HCMC will lack this vaccine by the end of December 2022.

According to Dr. Le Hong Nga, Ho Chi Minh City has not yet received the second high-dose vitamin A in 2022 from the National Institute of Nutrition. When receiving the drug, HCDC will notify medical centers soon to give children.

Previously, Ho Chi Minh City had not yet been allocated a vaccine by the National Immunization Program. Currently, vaccines are out of stock, including measles, DPT (diphtheria - pertussis - tetanus), Japanese encephalitis, measles-rubella, and oral polio. Measles and DPT vaccines have been discontinued from May 2022.

As a result, The Department of Health of Ho Chi Minh City requested the Ministry of Health to support and direct the National Immunization Program to distribute vaccines to the city as soon as possible.

The Expanded Immunization Program has been implemented in Vietnam since 1981, initiated by the Ministry of Health with the support of the World Health Organization (WHO) and the United Nations Children's Fund (UNICEF).

The program's initial goal was to provide free vaccinations for children under 1 year of age with the aim to protect them from six common and highly fatal infectious diseases. The program has been gradually expanded with a high rate of coverage. From 1985 until now, all children under one year old nationwide have had the opportunity to access the program.