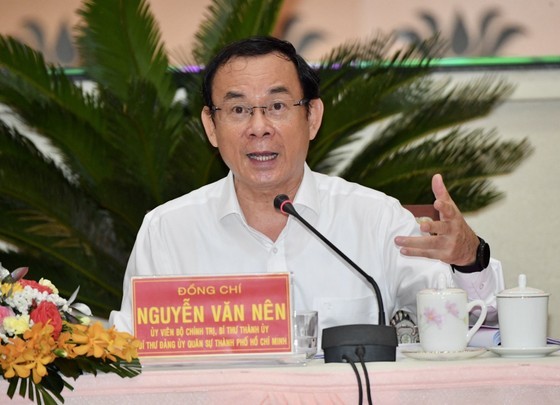 Concluding the meeting, Secretary Nguyen Van Nen agreed and highly appreciated the achievements that the southern metropolis gained in the past year but he simultaneously pointed out some limitations and shortcomings that need to be overcome in the future.

2023 is the year that Ho Chi Minh City must make efforts and speed up to carry out socio-economic, defense and security tasks. The next year is the pivotal year to complete the key tasks set out by the 11th Congress of the Party Committee of Ho Chi Minh City.

Therefore, Mr. Nen requested to forecast correctly and accurately the situation so that city governments will have plans to prepare for the upcoming tasks. At the same time, all department agencies and sectors across the city must strive more to speed up and strengthen the implementation of assigned tasks. In particular, consulting agencies must make more efforts to predict what should be done. 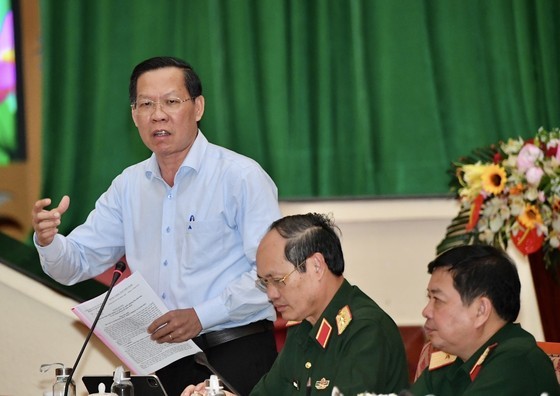 Chairman of the Ho Chi Minh City People's Committee Phan Van Mai speaks at the conference (Photo: SGGP)
The Lunar New Year is approaching, and the Secretary of the City Party Committee of Ho Chi Minh City reminded competent agencies attention to taking care of city dwellers so that al inhabitants will enjoy a happy and prosperous Tet holiday. First of all, administrations in Ho Chi Minh City’s districts should take heed of the living condition of families which are beneficiaries of social policies, people serving in the cause of the nation’s revolution, and the disadvantaged.

In the current general context, many businesses have been facing difficulties and a lack of orders, so they have to cut the workforce, and workers were laid off. Therefore, Secretary Nen emphasized that Ho Chi Minh City must have special policies for workers who lost their jobs, especially those who cannot return to their hometowns to reunite with their relatives.

In particular, the Military Party Committee of Ho Chi Minh City must act as a bridge to connect agencies, units and localities to have timely care and support.

At the conference, Chairman of the Ho Chi Minh City People's Committee Phan Van Mai said that the socio-economic situation in 2023 will be more difficult affecting people's lives and national defense and security tasks in the city.

Chairman Mai informed that the Politburo will issue a new Resolution to replace the Politburo's Resolution 16 on the direction and tasks of developing Ho Chi Minh City this month.

For a number of specific tasks, the Chairman of the People's Committee of Ho Chi Minh City emphasized that 2023 is the year that the southern largest city must speed up the completion of several important tasks, including a review of the city’s general planning and the socio-economic development plans for the period of 2021-2030 with a vision to 2050.