A delegation of HCMC officials led by Secretary of the HCMC Party Committee, Nguyen Van Nen extends congratulations to Archbishop of the Archdiocese of HCMC, Joseph Nguyen Nang.

On behalf of the city’s leaders, the Party Chief of the city expressed his greetings to the Archdiocese of HCMC which is honored to have three archbishops elected as members of the Catholic Bishops’ Conference of Vietnam, including Joseph Nguyen Nang, Archbishop of the Archdiocese of HCMC; Joseph Do Manh Hung, Archbishop of the Phan Thiet Diocese in the south-central province of Binh Thuan; Auxiliary Bishop LouisNguyen Anh Tuan, apostolic administrator of Ha Tinh Diocese in the north-central province of Ha Tinh. 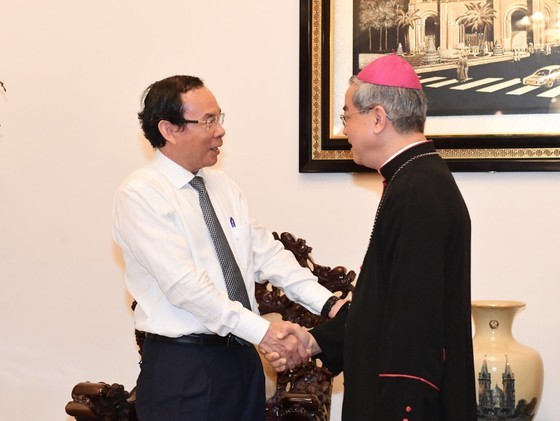 He highlighted the outstanding contributions made by the municipal archdiocese and followers to the city’s socio-economic recovery and development program after the Covid-19 pandemic.

He hoped that Archbishop Nguyen Nang would continue to contribute to building the country to become a powerful and prosperous nation, and developing HCMC into a dynamic, modern, civilized city with sentimental attachment during his new tenure. 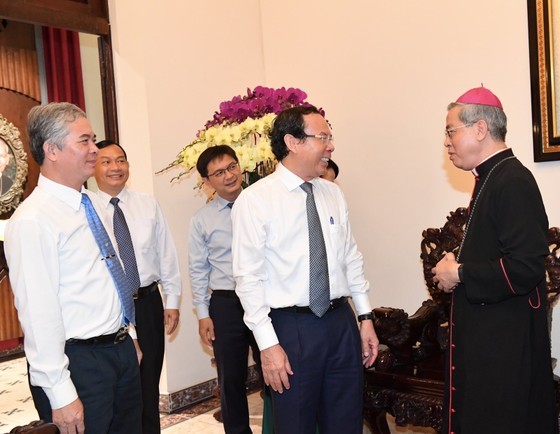 Archbishop of the Archdiocese of HCMC, Joseph Nguyen Nang (R) expressed his sincere thanks to the city's leaders.

According to Archbishop Nguyen Nang, HCMC is a center of economy, culture and society, science and technology, and has always been at the forefront of innovation and creativity and provided talented employees for key positions in different sectors of the country.

Archbishop of the Archdiocese of HCMC, Catholic dignitaries, and followers will continue to contribute to the development of the country in general and HCMC particularly.