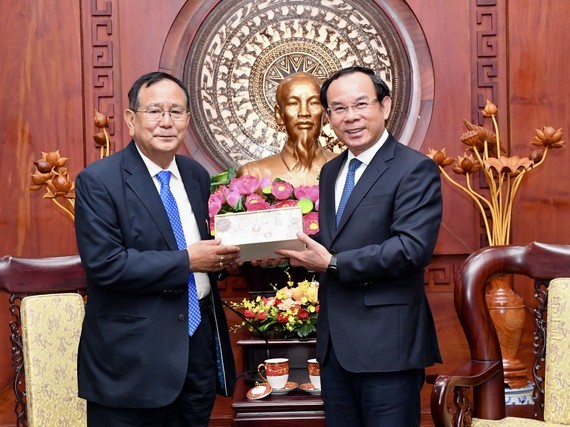 At the meeting, Mr. Nguyen Van Nen congratulated important achievements that India had achieved in the construction and development of the country, as well as its rapid recovery of the Indian economy after controlling the Covid-19 pandemic.

For his part, Mr. Rajkumar Ranjan Singh expressed his pleasure when visiting Vietnam and HCMC on the occasion of the 50th anniversary of the establishment of diplomatic relations between the two countries.

On this occasion, Mr. Rajkumar Ranjan Singh emphasized that India had chosen Vietnam as one of the pillars of its Look East Policy, as well as its visionary policy in the region.

Mr. Rajkumar Ranjan Singh assessed that bilateral trade between Vietnam and India has grown rapidly in recent years and is pleased with the presence of many Indian enterprises there. 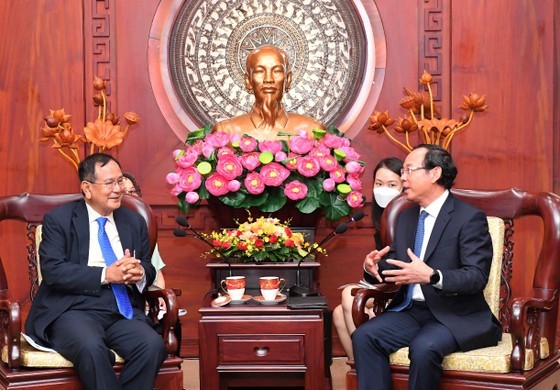 Mr. Nguyen Van Nen, Secretary of the HCMC Party Committee, receives Mr. Rajkumar Ranjan Singh, State Secretary of the Ministry of Foreign Affairs and the Indian Ministry of Education, on September 27. (Photo: SGGP)
Assessing HCMC as one of the fastest growing cities in the region, Mr. Rajkumar Ranjan Singh said that the potential for cooperation between the two sides remains huge in the fields of information technology, agriculture, healthcare, traditional medicines, smart city, start-up, green and clean energy, climate change fight, and sustainable development. Agreeing with the proposals of the State Secretary of India, Mr. Nguyen Van Nen said that the city would step up these issues, as well as find solutions to strengthen cooperation in economy, trade, and investment further in key areas that are the strengths of the two sides, such as energy, information technology, culture, pharmaceutical industry, agriculture, and food security. Because the space and potential for cooperation are still large, Mr. Nguyen Van Nen suggested that the two sides jointly promote stronger bilateral cooperation pillars to achieve the set targets and create favorable conditions to boost trade turnover of the two countries and socio-economic development.

The scene of the meeting. (Photo: SGGP)
The two sides also emphasized the long tradition of close ties in culture and history between the two nations and vowed to continue promoting the Vietnam - India Comprehensive Strategic Partnership to develop robustly in many fields.
By Xuan Hanh – Translated by Bao Nghi