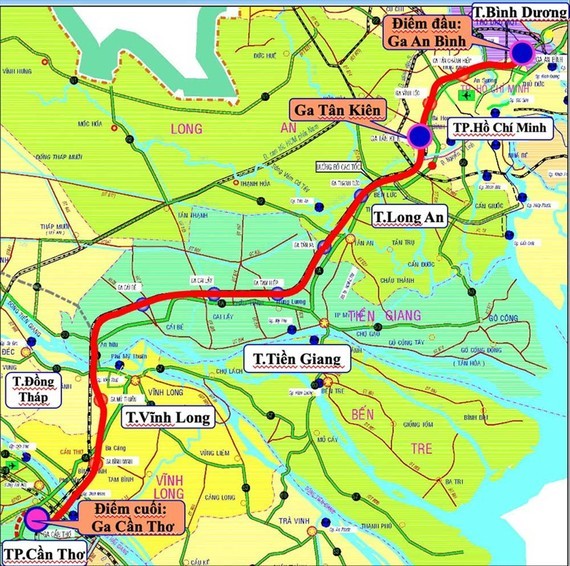 The map of the HCMC - Can Tho high-speed raiway route. (Photo: SGGP)

Minister of Transport Nguyen Van The said that the HCMC - Can Tho railway line is an important project in connecting the center of the Southern key economic region with the Mekong Delta region. The project has been planned in Resolution No.13-NQ/TW dated January 16, 2012, of the 11th Party Central Committee and the Railway Network Development Planning with an investment process before 2030.

According to the Railway Project Management Unit, the proposed investment of the HCMC - Can Tho railway project by June 2022 is about VND170 trillion, equivalent to US$7 billion. A representative of the Railway Project Management Unit said that the capital plan for the project had not been finalized, which can be in the form of a public-private partnership (PPP) or the State contributing 20 percent and the investor investing 80 percent.

Regarding the method of exchanging land for infrastructure, the Ministry of Transport said that the Phuong Nam Science and Technology Institute had previously sent a research report on investment in the HCMC - Can Tho high-speed railway project in the form of PPP to the Ministry of Transport. Phuong Nam Science and Technology Institute expected total investment capital of about $10 billion and put forward a plan of 100 percent of investor capital. The State would assign the private sector to manage and exploit it for 25 years then the investor would return it to the State. Along with that, the State would allocate land to investors to utilize at nine train stations. This proposal is feasible in practice but difficult because the option of recovering capital by changing land for infrastructure in the form of a BT contract is not recognized in the PPP Law.

However, international experience also shows that, when investing in railway infrastructure in the form of PPP, if the investor only recovers capital by selling passenger tickets or providing freight service, it cannot make up for the investment capital. Therefore, according to the Ministry of Transport, for the project to be feasible, it is necessary to make a development planning of related ecosystems on the route, such as urban areas, industrial parks, and export processing zones near train stations, for investors to exploit. Therefore, in the context of the limited State budget, the most feasible solution is to attract social resources to invest in railway development.

A representative of the railway project management unit said that the advantage of the project is that the HCMC - Can Tho railway line goes along the same corridor and is parallel to the Saigon - Trung Luong - My Thuan Expressway. Thus, the railway route is consistent with current and future local planning, creating a connection between the two modes of passenger and freight transport. On the other hand, site clearance costs will be significantly reduced because more than one-third of the route length is located on the reserve corridor of the expressway, and localities can save the local land fund.

It can be said that this project has been under basic research. The remaining key is to have a suitable and effective implementation mechanism.

The HCMC - Can Tho railway line is expected to start at An Binh Station in Binh Duong Province and end at Cai Rang Station. The length of the whole route is about 174km, with 13 train stations passing through six provinces and cities, including Binh Duong, HCMC, Long An, Tien Giang, Vinh Long, and Can Tho. The design speed is about 190km/h for passenger trains and 120km/h for freight trains.

Localities want to do it soon

The Department of Transport of HCMC has recently proposed the People's Committee of HCMC request the Ministry of Transport prioritize investment in the Thu Thiem - Long Thanh and the HCMC - Can Tho railway routes in the process of developing an investment plan and developing the HCMC area inter-connected railway network. They are works that make an important contribution to solving the infrastructure overload for the city.

The Chairman of Can Tho City People's Committee issued the plan and assigned the Director of the Department of Transport of Can Tho City to closely coordinate with the Ministry of Transport and the People's Committees of relevant localities to complete the pre-feasibility study report of the HCMC - Can Tho railway project. From there, it will submit to the National Assembly for the approval of the investment policy in the period 2022-2025 and the deployment of the investment before 2030, in accordance with the national railway system planning until 2030, with a vision to 2045. The project will help connect the Southern key economic region with Can Tho City and the Mekong Delta provinces. Mr. Tran Viet Truong, Chairman of Can Tho City People's Committee, said that, so far, it has not been specified whether the project will use the State capital or local capital, or both. However, with the importance and expectation of this railway line, Can Tho City will ensure the capital source for the project construction in case the locality is assigned to reciprocate capital.

The departments of Transport of Long An, Tien Giang, and Vinh Long Provinces also assessed that the HCMC - Can Tho railway line will help develop the whole Mekong Delta region. Therefore, when the central government needs local participation, the locality will be willing to cooperate. The provinces are eager to implement the project soon and highly agree with the planning of the railway route and propose to implement the project as soon as possible.

CT Group wants to invest in the project

Chairman of CT Group Tran Kim Chung said that CT Group wants to invest in the HCMC - Can Tho high-speed railway project, because this is a project with an extremely high socio-economic value. According to CT Group, no railway line can connect the delta, which accounts for more than 50 percent of the country's total export turnover of vegetables, fruits, and food, with the seaport cluster in HCMC or connect with ships carrying goods to the North (via Song Than Station) like this project. If fruit, shrimp, and fish from the Mekong Delta region are transported to HCMC within one hour, they will be ensured good quality. Trucks will no longer have to run in a hurry to keep fish, shrimp, vegetables, and fruits from spoiling. Thus, it will help reduce road traffic accidents, as well as emissions from vehicles, helping the Mekong Delta region develop more sustainably.

Most importantly, the Mekong Delta region needs a boost to develop in accordance with its potential. To promote the development of the Mekong Delta region, perhaps, a high-speed railway will be an important contributing factor. The HCMC - Can Tho high-speed railway will help the Mekong Delta develop further, with the formation of urban railway stations along the route. Each railway urban will include scientific and technical facilities, logistics, trade and services, and modern smart cities, with the train station as the center. Each train station will be specially designed to reflect the identity of each province. People in the Mekong Delta provinces can go to work in HCMC and return on the same day, helping HCMC reduce overloading.