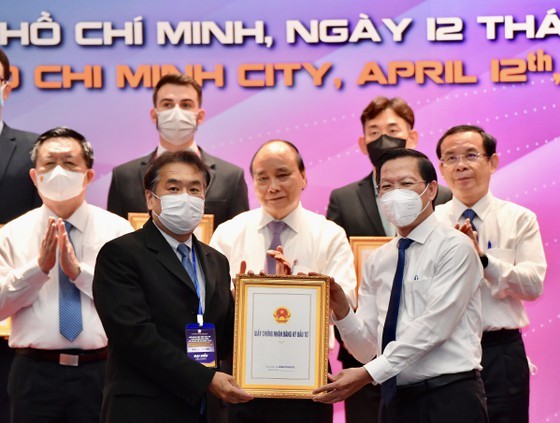 At the conference, representatives of enterprises and investors raised many ideas and gave some advice on investment projects in Hoc Mon and Cu Chi districts.

Mr. Lee Chong Min, Chairman of CMIA Capital Partners, added that the Agri Food-Tech Eco Township project would be invested in Trung An Commune in Cu Chi District in collaboration with Surbana Jurong as the proposed development manager and technical consultant for the project.

According to Mr. Lee Chong Min, with his experience and potential, this project will certainly bring motivation for development to HCMC and Cu Chi District, especially in the period after the Covid-19 pandemic, and it is also an initial project for high-tech agro-food-ecological urban areas in Vietnam.


“This is a large, long-term project, and the payback can only be achieved after the 7th year onward, provided that the project is not delayed. Therefore, we hope that HCMC will actively support enterprise, especially in compensation and resettlement," suggested Mr. Lee Chong Min. 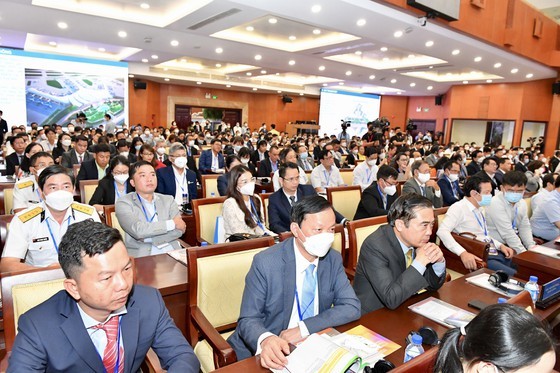 Delegates attend the investment promotion conference in Cu Chi and Hoc Mon districts. (Photo: SGGP)
Mr. Pham Thiet Hoa, General Director of Saigon Agriculture Incorporation Company (Sagri), suggested that the city consider expanding more hi-tech agricultural zones, expanding high-tech livestock production zones, and producing short-lived plant varieties because it does not require a large area but can create several tens of billions of Vietnamese dong per hectare. Accordingly, Sagri will sign with investors to develop high-tech agriculture and especially, a system of slaughtering and processing livestock and poultry with modern high technologies, contributing to producing and processing clean food to supply the domestic market and export. This is also a content of the sustainable development strategy that Sagri has determined and contributes to providing safe food for export. Mr. Nguyen Cong Hong, General Director of TDH Ecoland Urban Development and Investment Joint Stock Company, proposed a plan to adjust the planning of the Dong Thanh landfill site. At the same time, the company pledges to make an investment project proposal and a pre-feasibility study report for the project of investment and construction of Dong Thanh ecological urban area. The company commits that, within three years, it will complete the entire project, including thoroughly treating the landfill and completing the project. Speaking at the conference on investment promotion in Hoc Mon and Cu Chi districts, Secretary of the HCMC Party Committee Nguyen Van Nen emphasized that HCMC promises to make efforts with the highest determination as quickly and efficiently as possible to create the best conditions for domestic and foreign enterprises to invest in the city. 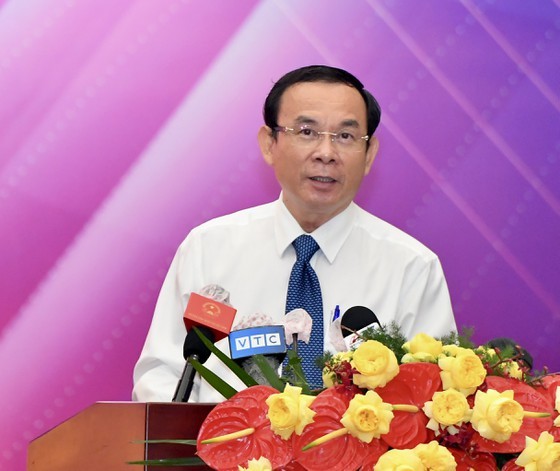 Secretary of the HCMC Party Committee Nguyen Van Nen speaks at the conference. (Photo: SGGP)
Mr. Nguyen Van Nen said that HCMC experienced a year full of hardships and unprecedented challenges in 2021. The city underwent more than 150 days of continuously responding to the Covid-19 pandemic with the Delta variant when there was no vaccine and treatment. Sometimes, it seemed the city could not overcome the pandemic. During that difficult time, HCMC saw the spirit, the willingness to sacrifice, the unyielding will, and the extraordinary endurance of citizens, businesses, and frontline forces. According to Mr. Nguyen Van Nen, the city has witnessed a robust resilience in which citizens and the business community have done amazing things even though they still bear many "injuries". HCMC once accepted a negative growth rate of more than 6 percent at the end of 2021, an unprecedented figure in the history of the city. Now, it has achieved positive growth of nearly 2 percent in the first quarter of 2022, with some important socio-economic indicators being achieved and exceeded. The Secretary of the HCMC Party Committee assessed that the investment promotion conference in Hoc Mon and Cu Chi districts carries three meanings. First, it is to implement the action plan of HCMC. Second, it is to fulfill the promise of the National Assembly deputies to the people and voters of HCMC, especially voters of Hoc Mon and Cu Chi districts. Third, it is to create opportunities for agencies, units, businesses, and investors to continue carrying out their missions, committing to accompanying and implementing the economic recovery and development strategy of HCMC. 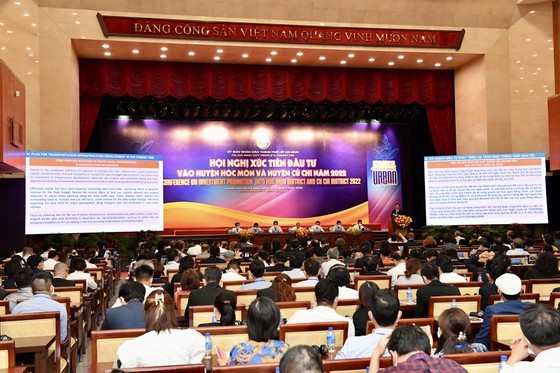 The scene of the investment promotion conference in Cu Chi and Hoc Mon districts on April 12. (Photo: SGGP)
Mr. Nguyen Van Nen said that the leaders of HCMC deeply appreciate and sincerely thank the affection and responsibility of President Nguyen Xuan Phuc, leaders of central departments, ministries, and provinces. At the same time, the city would like to thank the business community and domestic and foreign investors for standing side by side, supporting, and sharing with the leaders and people of HCMC during the most difficult time. According to him, this investment promotion conference continues to respond to the call, be willing to participate in and implement many projects with important socio-economic significance, with a determination to create the highest value, contributing to the development and improvement of the quality of life of the people in these two districts. Mr. Nguyen Van Nen emphasized that HCMC promises to make efforts with the highest determination as quickly and efficiently as possible to create the best conditions for domestic and foreign enterprises to do business in the city. At the same time, it will constantly improve service capacity, strongly reform administrative procedures, creating an open and friendly environment to improve the investment environment in HCMC.
By Manh Hoa, Van Minh – Translated by Bao Nghi