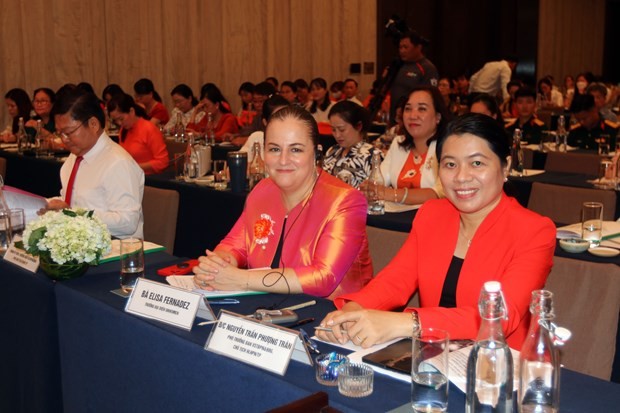 Delegates at the meeting (Photo: VNA)

Gender equality is a global issue of concern to many countries, Duong Anh Duc, Vice Chairman of the HCMC People’s Committee, who is also head of the city Committee for the Advancement of Women and Gender Equality, told a meeting on the implementation of the National Strategy on Gender Equality and Response to gender-based violence from 2025-2030 held in the southern city on September 29.

It aims at narrowing the gender gap in industries, creating opportunities for women and men to participate and enjoy equal benefits in all fields of social life and contributing to the city’s sustainable development.

He emphasized that the city will focus on reviewing activities, devising solutions for capacity building on gender equality, and ensuring that the contingent of cadres, civil servants, public employees and workers fully understand the consequences of gender stereotypes and gender-based violence on the development of individuals, families, and society.

Under the strategy, the number of women holding key leadership positions in State management agencies and local administrations at all levels will reach 60 and 75 percent by 2025 and 2030, respectively.

It also sets targets and provides key solutions to prevent and respond to gender-based violence in the medical, education and training and communication sectors toward building a safe, friendly city for women and children, he said.

According to Duc, in order to change gender stereotypes and violent acts influenced by cultural concepts, it is necessary to have the synchronous participation of agencies, organizations and the whole community, adding that the media agencies, the press and the journalists themselves have an important role in communications to eliminate prejudices, raise awareness, and change behavior about gender equality in society.

Elisa Fernandez Saenz, UN Women Representative in Vietnam, highly appreciated the city’s efforts on gender equality and responding to gender-based violence, highlighting policies to prevent violence and setting up a hotline for victims of domestic violence.

UN Women is committed to continuing to support the city in carrying out activities on gender equality and preventing gender-based violence, including providing technical support and capacity building for sectors and communities to strengthen safe spaces for women and children, she said.